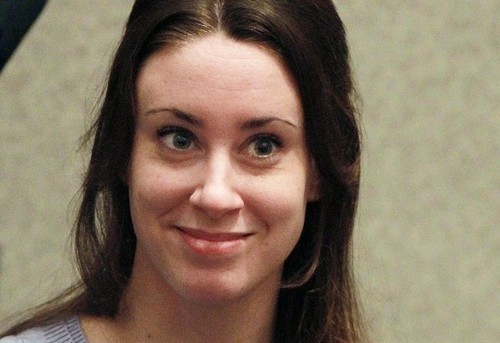 Apparently Muder Mom Casey Anthony has spent so much quality time in the courtroom over the last four years that she’s considering a career in the legal field. Quite possibly the most hated woman in the country, Casey hasn’t managed to hold down a job in over four years. She was imprisoned for a good chunk of that time on charges connected to her two-year old daughter Caylee’s death and this past year and a half she has basically been in hiding.

According to her latest attorney, Charles Greene, Casey might pop up in a courtroom near you sooner or later as a paralegal or something. According to him, “She’s better than many paralegals I know. She could be a paralegal or something like that right away. She is very organized, a very intelligent, very computer savvy person, so I think her skills and her desire may lie somewhere in that field.”

One this is for certain, Casey better do something quick. The tot mom is $800,000 in debt and has less than $1100 to her name. She filed for bankruptcy last week in an attempt to escape some of the debt but still, she needs to do something and quick. But how? How does Casey get a real job or go to school without being targeted? Nobody likes a baby killer and to the majority of the country, that’s exactly what she is! She can’t be charged in her daughter’s death ever again but by the American people’s stand point, Casey has been pretty much convicted.

Do you think the legal system that ultimately failed to get justice for Caylee would welcome Casey working in it? Would you want her in your courtroom collecting a pay check? Tell us your thoughts in the comments below!