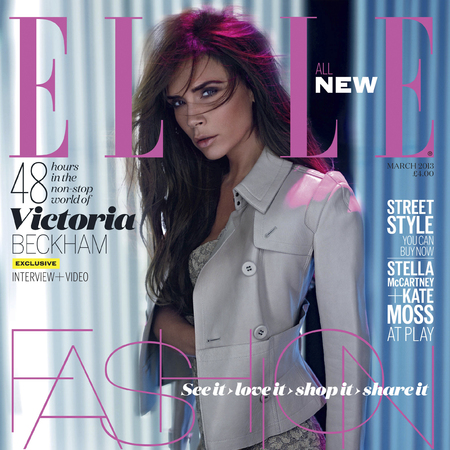 Aww, poor Vic. Victoria Beckham has said she feels like she is the least popular person out of all the famous people she knows, including her husband David Beckham. Clearly, she is starting show signs that she is a very insecure woman – which she refused to admit – telling ELLE UK about her work ethic to create a successful brand of her own in the fashion industry.

The singer-turned-fashion designer says she has become a workaholic since moving to the States as she pursued to start a career in the fashion industry. Her clothing line, Victoria Beckham, has had amazing reviews by critics, but that seems to be what strives the 38-year old to only work even hard. Though she was known as the “worst singer” in Spice Girls, she says: “It was never my intention to prove anybody wrong. I wanted to prove to myself that I could do it. I don’t have to work, I need to work.”

Victoria explained why she feels to be the least liked person out of the Spice Girls, telling the magazine that she never ever feels like people would want to approach her for a photo: “When I was on stage with the Spice Girls, I thought people were there to see the other four and not me. And when I go out with David and people take pictures I think, ‘They’re here to take David’s picture’.”

Victoria has learned many things during her time in the States, since her business pretty much was founded in Los Angeles. But now, she feels like she has mastered the skills she needs to be a successful designer and is ready to find a new home for herself and the family — yup… back to England. Beckham, her hubby and the kids are moving back to Britain after David’s deal with the LA Galaxy came to an end. Tired already? Ha!

Speaking of her business decision and moving back to England, she says: “You’ve got to trust people. And because I am a control freak, sometimes that’s difficult for me, because I want to micro-manage absolutely everything. I can’t hand over. But I’m trying to do that more. It’s hard because I have such a specific vision. Now David has finished playing for LA Galaxy and we are starting a new chapter in our lives; as a family we are all very excited about what lies ahead for 2013.”