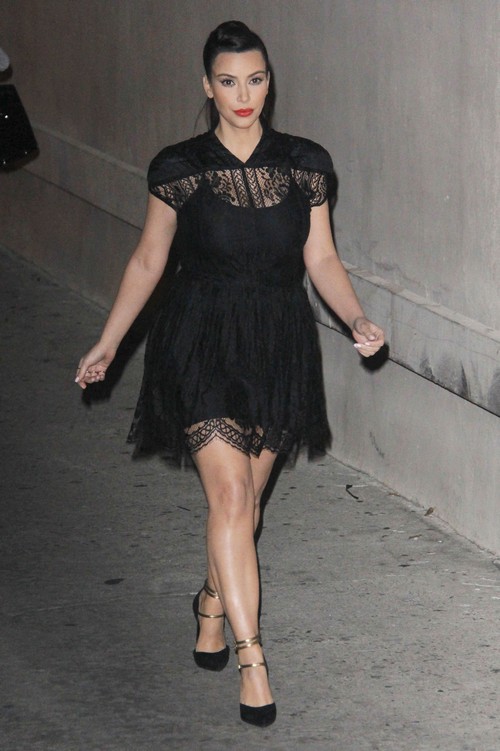 Kim Kardashian has confirmed reports she will not be showing off her brand new baby on her reality show once she gives birth. Unlike her older sister Kourtney Kardashian, Kim has opted out from having the birth of her baby being shown on their show Keeping up with the Kardashians, which is very unusual considering that Kimmy is a fame-whore, but then we realized that Kanye West must have demanded her not to do it.

The rapper can be wearing demanding; last year we saw Kim wear a lot of leather when she started dating him, and in one episode we saw him tell Kim she needs to get rid of most of her clothes because they were ‘tacky’. He’s a very weird dude, we must say, but obviously he’s loaded with money and anyone with money is going to have Kim’s attention AND will make her do crazy things… such as do whatever they tell her to.

While promoting her show Kourtney and Kim Take Miami on the Jimmy Kimmel show, the four-month pregnant reality star said her little Kimye baby will not make an appearance on the show because it was a decision that she and Kanye made together, they supposedly want to respect their baby’s privacy and putting him on the show may not even what the baby wants… this all according to Kim. LOL! How could the baby know what he wants at such a young age? Kim says that once her child decides he or she wants to be on reality-TV, she will have a word with Kanye to consider it. LOLz!!

The 31-year-old said: “The baby is not going to be on our show. When he or she decides that’s what they want to do, then that will be a decision. I love seeing Mason and Penelope on TV. Mason is the highlight of our show, I think. It’s a tough decision. From the start, as of now, that’s just a personal choice that Kanye and I have made. We’re going to try to keep it as private as possible.”