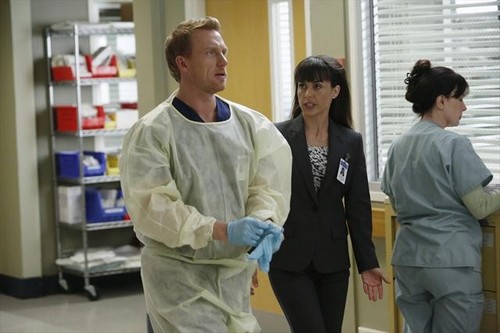 Tonight is a new episode of ABC’s popular medical drama Grey’s Anatomy called, “Bad Blood.”  On last week’s show Meredith, Derek, Cristina and Arizona received big news regarding the plane crash lawsuit, Richard avoided Catherine’s romantic advances and Jackson took on one of Mark Sloane’s old patients. Meanwhile, Derek began recovery on his hand.  If you missed last week’s episode we have a full and detailed recap here for you.

On tonight’s show as Derek and April work around the clock to find a solution for the hospital, Cristina struggles to respect the wishes of a family whose son is dying. Meanwhile, Arizona empathizes with a teenager who faces problems similar to her own.

Be sure to tune in for our live coverage of ABC’s “Grey’s Anatomy” Season 9 episode 13 at 9 PM EST!