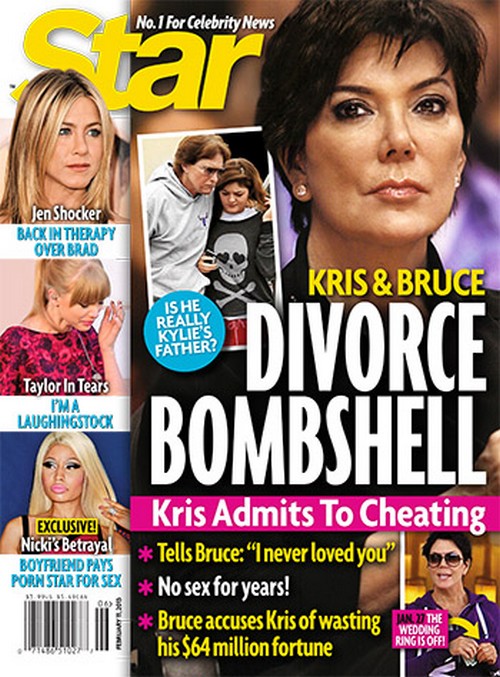 It just keeps getting uglier for Kris Jenner and Bruce Jenner. Frankly I’m surprised that the couple is even still pretending to have a marriage and the fact that they are semi-trying to continue the charade makes me think there really are some ugly secrets in both of their closets. According to the new issue of Star, Bruce is over it. He’s sick of being insulted and made fun of by Kris and he’s really fed up with having his buttons pushed. According to a source,

“They had a huge screaming fight once, where Bruce accused her of cheating on him, and Kris didn’t deny it one bit,” says the Star source. “She was toying with his emotions, even subtly hinting that Kylie might not be his.”

So what leverage may Kris have? Well according to the same source Bruce may like to engage in a bit of cross-dressing from time to time and Kris has threatened to tell the world all about it if he hits the bricks! Also there is a mountain of money and financial investments at stake. I can’t imagine Bruce caring as much about that. I think it’s a personal secret and wanting to be around his daughters daily that his kept him with Kris for this long.

Also Kris is capable of anything and to her any publicity is good so I don’t think it’s at all beneath her to create some sort of nonsense just to grab headlines and make her once-doting husband look like an a**.

How long before the Jenner’s finally publicly admit defeat and announce a split? Do you expect it to get super ugly once that announcement comes? Tell us your thoughts in the comments below!