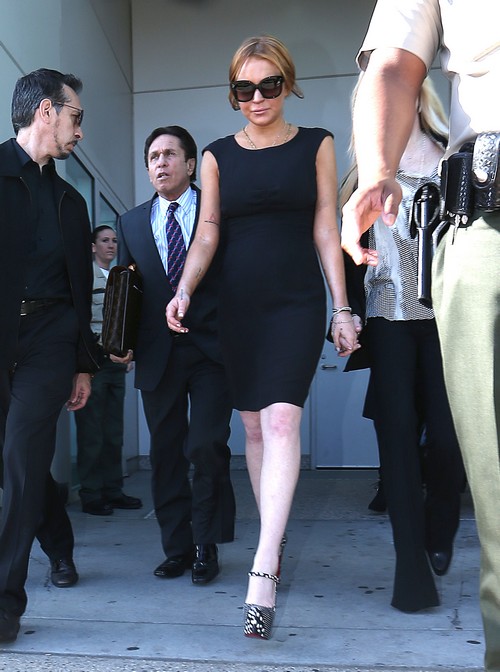 Just when I think that Lindsay Lohan can’t possibly get any crazier she goes and outdoes herself and at this point, that’s certainly not an easy thing to do!  Since Lindsay obviously feels very at home tangled in legal proceedings she has thought nothing of suing Marilyn Monroe over the 6126 trademark. A few years back Lindsay designed leggings for the 6126 company and is unhappy with the profits. So how is Marilyn connected? Well the film star’s birthday is 6126 and that has affected Lindsay’s sales- at least according to her. How much is all of this worth to the broke actress? A million bucks! At least that was the price tag attached to the documents filed by her attorney, Perry Wander.

So what has led Lindsay to try to collect money for this bit of craziness? Well by all accounts Lindsay is two steps from broke. While she and her mother, Dina Lohan were hard pressed to find an LA hotel that would keep them, I have to admit I’m still amazed that she can afford to pay for a room at Motel 6 let alone anywhere upscale!

Maybe if Lindz quit finding her way back to court and focused on actually working and building a half decent life she’d be doing much better! As it stands right now, aside from this recently filed nonsense, her trial for lying to police begins in early March. Who cares about getting money for her leggings, she needs to figure out how to keep herself out of jail.

Maybe she should take her life and turn it into a film with someone else playing the role of Lindsay of course. That would generate fast cash! How crazy do you think Lindz is? Head over to our friend over at Calvin Blanco to find out more about this crazy story HERE!