One Direction’s Parents Furious Over Their Many Tattoos 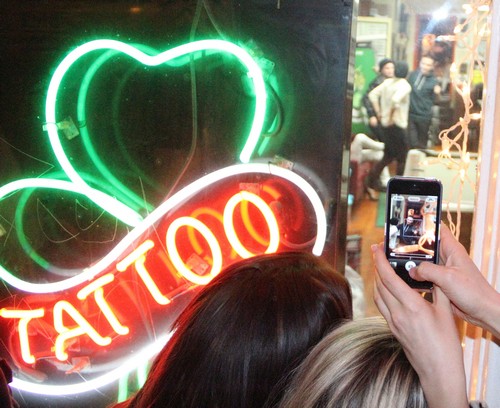 One Direction have admitted their parents are not too happy about them getting their body inked with stupid crap. The group, who have enjoyed international success all over the world, have been getting new tattoos on their body since summer 2012 and while Harry Styles now has more than ten of them all over him, the rest of the band are starting to catch up with Zayn Malik being the latest fella to get a microphone tattoo on his arm! WTF!?

The British guys have told ITV’s Daybreak that their mothers were freaking out about the idea of having a tattoo done, especially Liam Payne – probably the one kid who has some sense in his head – as he told the reporter how his mother went “crazy” when he brought the subject up, while Zayn has said that their boss Simon Cowell hasn’t said one word. In other words, Simon doesn’t care as long as it doesn’t affect his monthly income from the boy band, it’s all good.

Liam Payne said: “My mom went crazy about the whole tattoo idea.” Zayn Malik added: “Simon [Cowell] hasn’t said anything but our moms have been like, ‘Maybe you’re getting a bit too much’.” Louis Tomlinson was asked if any of them would bring the mothers on stage with them when they go on their world tour. He replied: “Our moms would absolutely poo themselves if we brought them on stage. My mom wouldn’t know what to do.” Umm.. poo themselves? Oh lord – these kids and their vocabulary.

Malik added: “It’s really nice just to like look out and see your family, however embarrassing they’re being even if they’re on the chair dancing, like it’s just cool,” while Payne said: “My mom just cries the whole time, my mom literally has not stopped crying for the past two and a half years.” Asked if they had any plans on moving the US anytime soon, he continued: “No, I think someone just sits down and says, ‘What can I write about today?'”