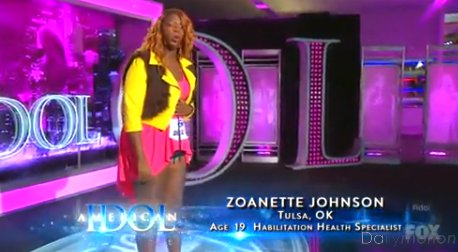 When American Idol continued their auditions last night in Oklahoma City, the judges were greeted by a very enthusiastic and patriotic singer, Zoanette Johnson. The singer came in ready to knock the National Anthem out of the ball park.

The song was apparently sung to celebrate President Obama and, after all the over-the-top ridiculousness, she says a few incoherent statements — something to the extent of President Obama better invite her to the White House sometime soon.

Parts of it aren’t horrible. But some parts aren’t amazing either. It’s so incredibly dramatic that it definitely makes you think uh-what’s-going-on-is-this-real? Yes. Yes, yes it is real. And yes, yes the judges did put her through to the next round.

I guess I am ton deaf because I thought the performance was horrible.  The judges disagreed and loved her.  To check out what the judges had to say and Nikki, visit our friend over at Twana Tells GO HERE!