Chris Brown Tried To Beat The S**t Out Of Frank Ocean, His Music Producer Confesses 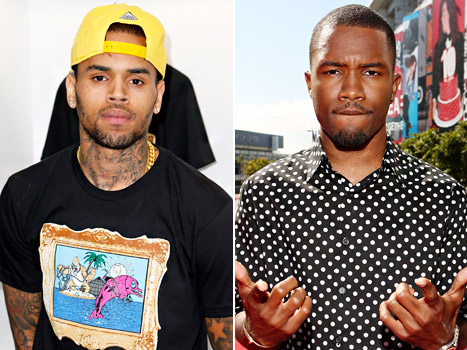 Wowza! According to Michael Uzowuru, Chris Brown tried to beat the sh** out of Frank Ocean last week Sunday when the R&B singer reportedly refused to let Breezy walk out of the studio after having told Brown the parking lot where Chris had parked his car was his usual spot. Soon after, things got physical and Chris wasn’t holding back as he threw the punches from left to right.

Michael – who has worked with Frank on his recent album Channel Orange – explained how maniac Chris Brown went crazy, he totally switched from ignorant guy to aggressive and mentally ill. The music producer who was present at the Westlake Studios explained how him, a friend and Frank pulled up to the car park, when they noticed Chris’ car in Frank’s spot which was labeled “Frank”. Clearly, Chris was just trying to start an argument from that point on.

When they called up the front desk to ask Chris to move the car, Chris came outside with a “big dude” and a skinnier one, – and when Frank asked Brown to move the car, the big dude attacked Ocean’s friend for no reason. “Then instantly Chris and the other dude grab [Frank] and try to jump him.” He adds, “There’s no doubt in my mind the whole thing was a set up.”

He continued that CB’s friends pinned Frank against the wall “while Chris was trying to beat the living “s**t” out of [him].” Wow — what a freakin’ jerk. Rihanna is a loser for loving someone so cruel. His music career sucks, so now he’s taking it out on other people?! Dude needs to get a life!