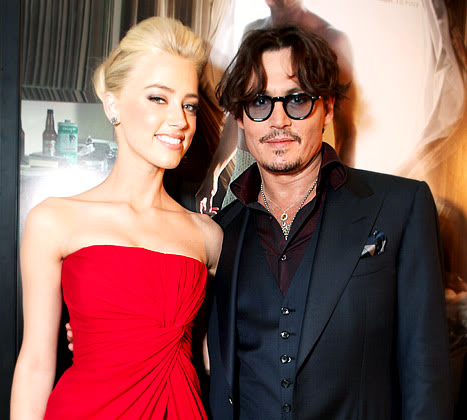 Johnny Depp is utterly crushed after his girlfriend of seven months Amber Heard had left him for another woman. The actor had split from his wife Vanessa Paradis after a fourteen-year relationship, and despite reports claiming he was also totally upset about that marriage messing up, he didn’t waste time to move on to Amber. So in all fairness, this guy will probably be upset for a couple of days and move on to the next.

But it must hurt a little bit more when you get dumped for a woman! Wowza – that’s never happened to us before. LOLz. Though he moves on pretty quickly when he’s single, Johnny is a very loyal man; he doesn’t cheat, he treats you like a princess and makes sure you are well taken care of (whether you’re in need of a new pair of shoes or a trip to Bora Bora, Johnny will make it happen). So why in the world would Amber leave a rich man like him? Well, it looks like “money can’t buy you happiness” after all, – which we think is bogus, but Heard seems to see it otherwise.

The 49-year old who thought Amber was “his future wife” is said to be devastated by her decision and is finding it very hard to move on from her: “Things hadn’t been right between them since before Christmas, but I doubt he realised this would happen,” an insider told British magazine Grazia. “He’ll be heartbroken.” Meanwhile a close friend added: “Johnny had felt he’d found his soulmate in Amber.”

Amber is now dating Marie de Villepin – the daughter of former Prime Minister of France Dominique de Villepin. Marie makes a full-time living as a model, whilst having started to branch out into acting. Hey — maybe Johnny will ask her to star in one of his movies some day — that way he can beg Marie to break up with Amber so she can be his again. Surely nobody wants to see Mr. Depp upset! Do you?! We don’t! Boo-hoo.