Lil Za Denies Introducing Justin Bieber To Sizzurp, Says He Doesn’t Even Know What It Is 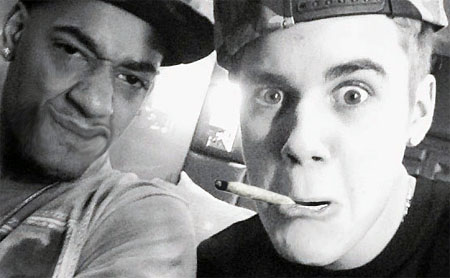 Lil Za is a little cheeky bastard, ain’t he? The rapper, who has not released any albums yet… but claims to be a rapper, was spotted in Beverly Hills last night and he was quick to deny reports that photos have been going about where Justin Bieber, Za and Lil Twist can all be seen “surrounded” by the sizzurp drank (yes, sizzurp drank). The liquid drug has an immediate effect on your body, getting you high almost instantly.

Anyway, when photographers approached him with the question about the whole sizzurp incident — note, the pics of the three and the sizzurp bottle is currently being shopped by media outlets to the highest bidder — Za acted like he didn’t even know what it was. Clearly the photos were a little slow when they didn’t realize the rapper was making them look like complete fools as they repeated the question several times.

Him, Twist and Bieber surrounded themselves around the liquid drug last month and the photos have been making they way on the internet, currently being sold to the highest bidder. When asked about it, Za started to act real dumb when he replied saying: “What, you mean apple syrup?”, “What are you talking about?”, “I like maple syrup”… “What is sizzurp?”.

He later on continue to rant about the entertainment site, claiming that they don’t know anything about him. He shouted: “TMZ, f**k you cos you don’t know nothing about me… West Life, tupac.” before being asked who the bad influence was on Bieber: “.. the devil… blame the devil.”

TMZ captured the entire thing going down; from Za actin’ all stupid to who he thinks is at fault for Bieber’s unusual recent behavior. Catch the video below and tell us what you think! In our opinion, Bieber needs to stay as far away from these people as possible — not that their a bad influence, but because it comes across as if they are just using him for his money and his cars (hence why Za is driving JB’s car again).