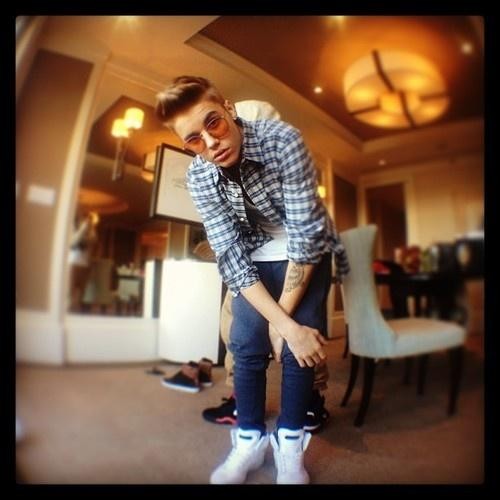 Justin Bieber and his crew threatened a man who was taking pictures of him, it has been reported. But first of all, why wasn’t he watching the Super Bowl? And secondly, why wasn’t there weed involved in this story? LOLz. Anyway, the Biebs – who now thinks he’s a bad boy because he’s chilling with colored boys (non-racial term) and smoking pot – wasn’t too happy to have his pic taken yesterday night when he shopped at Best Buy.

According to the man, he approached the singer and snapped a couple of pics – he wasn’t a photographer or a fan… he probably just wanted to show his family and friends he has finally met the biggest douchebag in Hollywood. Whatever the case, once he started doing his snip-snap, JB’s crew approached him angrily before telling him to immediately remove the pictures he had just taken of the 18-year old.

The unidentified man says he felt extremely threatened by the way they spoke to him, in fact, he was so scared that he even ended up calling over the LAPD in hopes that Bieber’s crew could apologize to a sobbing man. Okay – he weren’t sobbing, but he was acting like a baby.. clearly. LOLz!

We’re told that once the police got there, however, Justin and his team had already ran off… he didn’t want to trouble with the police after the couple of weeks he has had – cops were definitely not something he wanted to be dealing with. When asked to comment on the story, Justin Bieber’s team refused to say anything. Wowza! A new day and a new Justin story — this just keeps on getting better. It’s not long until we find out he is secretly banging Lindsay Lohan. Mark our words! Ha.