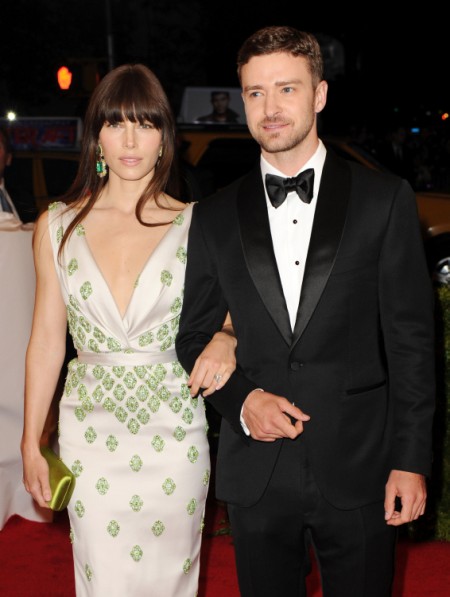 Hmm – looks like someone’s lying. Justin Timberlake has denied calling Britney Spears a biyotch on stage during his New Orleans Super Bowl show on Saturday, where he made special appearance alongside Jay-Z who was also invited on to the stage to perform Suit and Tie. The pop star had moved on to ‘Cry Me A River’, supposedly a song written about his relationship to Brit who had cheated on him with someone else.

Prior to having sung the number 1 hit, Timberlake had some very wise words to tell the audience about Britney — it’s so obvious he was referring to Britney even if he denies it – when he told them: “Sometimes in life, you think you found the one. But then one day you find out that she is just some bitch!” But – it only took minutes for the reaction to turn sour on social networking sites such as Twitter. Fans of Brit’s and JT’s were furious at the comment that was made, – everyone realized he was talking about the former X Factor judge, and people weren’t happy with what he had to say.

Now, JT isn’t usually the kid who would make someone feel like ish – he seems to be the kind of guy who likes to bring positivity in the world, and well.. that comment definitely was the complete opposite. But wait! Justin didn’t waste to hit back at fans who were slamming him for calling out Britney by referring to her as a bitch after he sang the song that he had written about her.

Well, Justin denied it all.. sorta! He said he would never hurt anyone’s feelings personally (umm… so does that mean you wanted to hurt her mentally?). We’re so confused. Here’s what he had to say on Twitter: “Ok. I see you. Wouldn’t disrespect ANYONE personally. Ever. #Relax #ItsBritneyBitch I do love that saying though *with accent* #Respect.”

Praising Britney’s lyrics while stabbing her in the back.. very classy of you JT… not.