Zayn Malik Won Back Perrie Edwards With A Teddy Bear 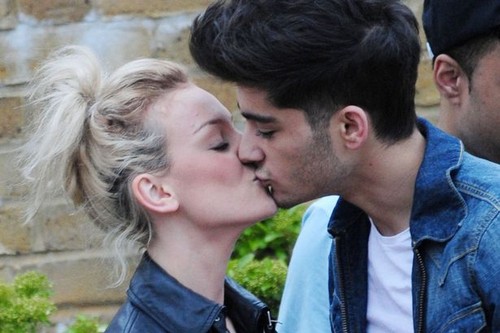 One Direction’s Zayn Malik won back Perrie Edwards after handing her a teddy bear, it had been reported. We’ve been hearing that the Little Mix singer and Malik had already rekindled their romance just days after the scandal broke that Zayn had cheated on Perrie, – she instantly forgave him but still had her doubts on what could happen when Malik goes on his world tour later this year with his boys. Will he cheat again?

Seeing how Zayn has been acting this last few days, it’s kind of certain that he loves Perrie very much and doesn’t want to let her go; he gave her a huge teddy bear at a station in Cheshire that he bought for her with the words ‘I love you’ on it, showing signs that he’s still terribly sorry for sleeping with Courtney Webb – probably his way of trying to make up for the terrible mistake he did two weeks ago.

A teddy bear? That’s  like $1, right? Is that all she’s worth , Zayn? You should have bought her a Range Rover or a diamond necklace, not a freakin’ teddy bear! LOLz. She probably thought to herself ‘is this all I’m worth to you?’. Oh Perrie – you are very much a fool to believe that Zayn will not cheat on you again. At the end of the day he’s just 20-years old and he has his whole life ahead of him, so thinking that he will stay with you forever and never cheat on you again. For now, Perri will continue to be the side-chick… in other words, the woman who is always there when Zayn is in London and not in any other parts of the world.

We wish them well, but know for a fact this relationship will be a wrap within the next couple of months. Mark our words that Zayn will cheat again during his world tour with One Direction!!