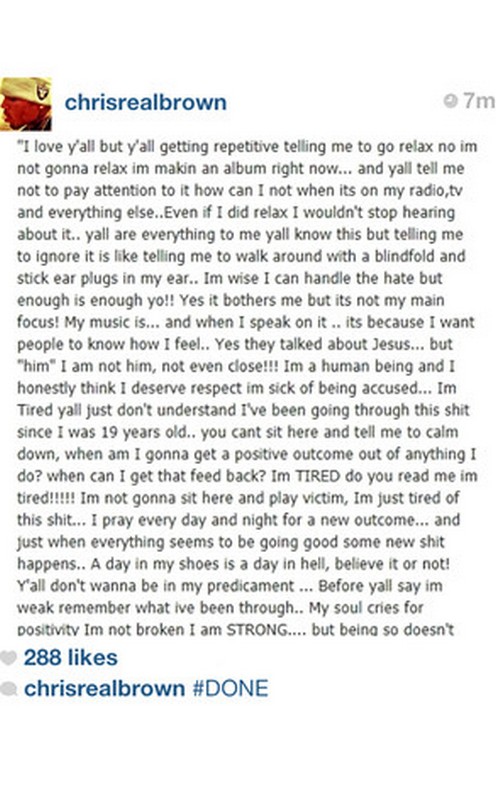 Chris Brown has opened up to his haters and his fans as he stills gets threats and negative comments about the mishap for years ago when he beat up his girlfriend Rihanna. The R&B singer – who was 19 at the time – has struggled to balance his music career with his personal life ever since while the social networking sites such as Twitter have given people a platform to send their vile and mean messages to the singer on what a bad person he is.

In a statement on his Instagram page, Chris poured his heart out to his millions of fans when he said he feels like he deserves respect as opposed to all the hating he has been receiving from people; he wishes people could move on and focus more on his music rather than on something that happened such as long time ago. Sadly, Brown’s music sales have been drastically affected ever since the beating in February ’09. He has released three albums, all which barely managed to hit platinum status while his release of F.A.M.E in 2011 had only sold 900,000 copies to date.

It’s a tough time for Chris, but only he can be blamed for the things he has done – because it’s not just Rihanna that he beat up… just over a week ago, he got into a brawl with Frank Ocean who explained to cops he got knocked the ish out of by Chris who beat him up while his “goons” pinned him to the wall. How do we give someone respect that keeps messing up!? You get it when you deserve, not the other way around.

Well, here’s what he had to say: “Y’all tell me not to pay attention to it – how can I not when it’s on my radio, TV and everything else,” he said in the message to his few trusted followers. I’m wise. I can handle the hate, but enough is enough yo… Yes they talked about Jesus, but… I am not him. Not even close. I’m a human being and I honestly think I deserve respect.” He continued: “I’m sick of being accused… I’ve been going through this s**t since I was 19 years old. You can’t sit here and tell me to calm down, when am I going to get a positive outcome out of anything I do?

“I’m not gonna sit here and play the victim, I’m just tired of this s**t. I pray every day and night for a new outcome and just when everything seems to be going good, some new s**t happens. A day in my shoes is a day in hell, believe it or not… Before y’all say I’m weak, remember what I’ve been through. My soul cries for positivity. I’m not broken, I am strong.”

Who is to blame, us (for not being able to forgive him) or Chris!?