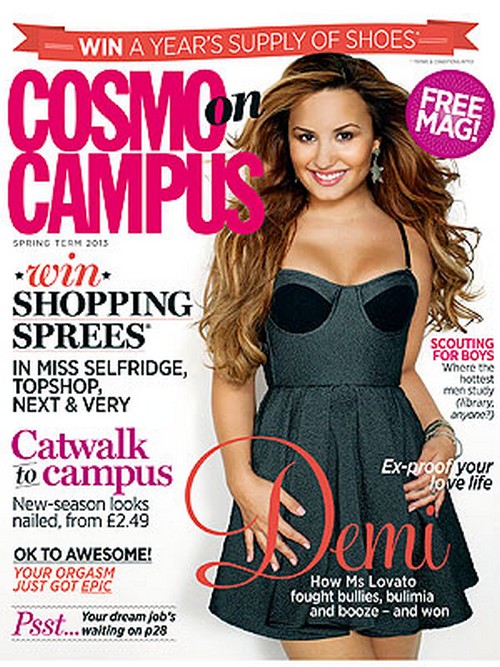 Demi Lovato says her eating disorders could have been prevented had other celebrities been more honest about their body issues. As we all know, these days, models and celebrities who cover magazines, they are most likely to have been airbrushed to death… in other words, that is nowhere near what they look like in real life. Demi feels that had people been more honest about their own body issues as opposed to trying to convince people that they really did look flawless, her bulimia could have been prevented.

Now, to us, this doesn’t really make sense, – why does a celebrity have to come out about their body issues for yourself to feel good about your own body!? But Lovato believes that people should be proud of what they look like and especially when you’re famous and young teenagers look up to you, you’d want to make sure they understand the concept of showbiz and what really hides behind the airbrushed effects and (occasionally) botox and plastic surgery.

Covering next month’s Cosmo on Campus, she tells the mag: “I was about 12 or 13 when I developed my eating disorder, and at that time nobody in the public eye talked about their body issues. I feel that if someone had admitted they had a problem, then I wouldn’t have gone down that route myself.  That’s my goal in talking about my problems. I want to be the person for other girls that I needed to admire when I was looking for help and strength.” She continues: “It’s okay to love your body the way it is and it’s okay to reach out for help if you have drug and alcohol problems, or if you’re self-harming or being bullied.”

When asked about how she was coping with her role as a judge on X Factor, the former Disney starlet revealed that she rushed into the opportunity when she should have actually considered it first – knowing that she was slowly recovering but wasn’t all the way there yet. Whether this means she’ll be back for the next season is unsure. She continued about her role on the show: “I don’t think I was ready when I started on The X Factor [in autumn 2012]. In an ideal situation I would have maybe waited a year or more [after coming out of treatment]. I dived into work really quickly and maybe that wasn’t the best idea at the time, but the place I am in today is so much better than I could have ever imagined, so I’m really glad.”