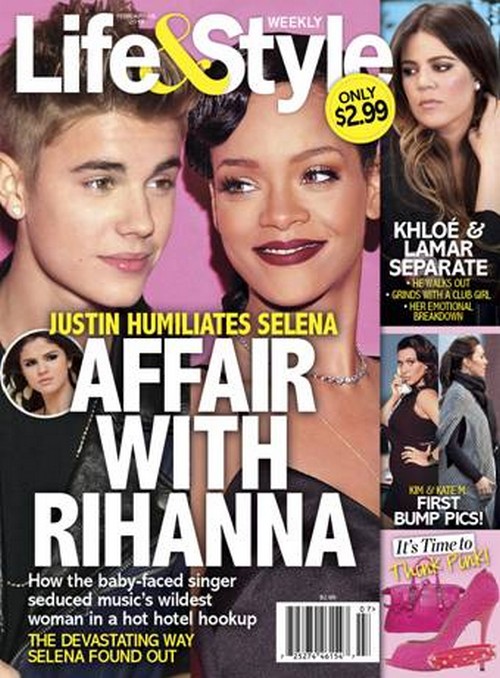 The current issue of Life & Style magazine features the explosive story story, “Justin Humiliates Selena – Affair with Rihanna!” !  WOWSA!  It seems that the magazine has found out the real reason that Justin Bieber and Selena Gomez have broken up.  Justin was a dirty dog and he hooked up with Miss Nasty herself Rihanna.

OMgosh, can you just imagine Chris Brown when he hears this info, run Bieber, run…..  The magazine has all the detail on how The Biebs seduced, “music’s wildest women in a hot hotel hookup.”  Not only that they have the details on the devastating way Selena found out.

“It has devastated her,” a friend of Selena and Justin’s reveals in the new issue of Life & Style. “It really cut like a knife because it happened in February of 2011, when Selena and Justin had been dating for months and were falling in love. It’s caused Selena to question their entire relationship.”

It all went down after Justin was flirting with Rihanna at a basketball game in February 2011.  Now Selena is worried that Justin has been cheating on her all the while they were in a relationship.  “Selena thinks maybe they’ve been hooking up all along,” their friend tells the mag.

Hey Hiccupers, what do you think of this new Justin news.  My how the mighty have fallen….Does it surprise you?