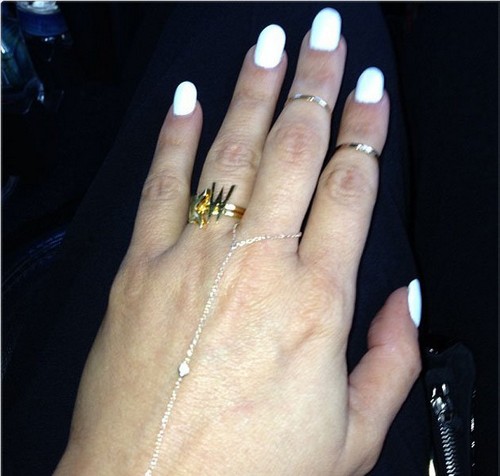 Kim Kardashian has hinted she could already be planning her third wedding to the one and only Kanye West despite the fact that she still hasn’t sorted out her legal drama with Kris Humphries. To be more specific, Kim is still a married woman – to Kris – and since Kim filed for divorce, the NBA star has refused to sign the papers because he knows the marriage was fraud, so the only thing he would accept from her is the annulment (which would mean Kim faked the whole thing).

Though we find it rather sickening that she could possibly be planning a wedding to her beau just one year after they started dating (excluding the starting date when they started smashing), Kim never fails to show the world how badly she wants to be a rapper’s wife. She posted a photo of her left hand earlier today, which would have meant nothing if she didn’t have the ‘KW’ initials on her engagement finger — she’s clearly hinting something is in the works.

… or maybe she’s just trying to start some kind of stir with the media seeing that the tabloids have been recycling the boring old ‘Kris Jenner divorcing Bruce’ story for the past two weeks now. Whatever the case, if you knew Kim as well as the entire world knows her, you’d know that she’s hinting at a wedding. The desperation for this woman to get hitched again is pretty unbelievable, but she’s pretty much done with her measly $1 million reality show deals… she has Kanye now.

It’s only a matter of time before Kim makes her way off reality-TV because she has “worked so hard” that she finally has another wallet to reach into, and as soon as Mr. West puts a ring on that woman WITHOUT a pre-nup, he will be begging for his best friend Jay-Z to help him pay for his rent. I mean, let’s be real – Kim is a gold digger and wherever the money is at, she’ll be there; if Bill Gates offered her a one-night stand for half a million, she’d scream: “Where do you want me?” (.. well.. so would we, but Kim’s situation is different. Ha).