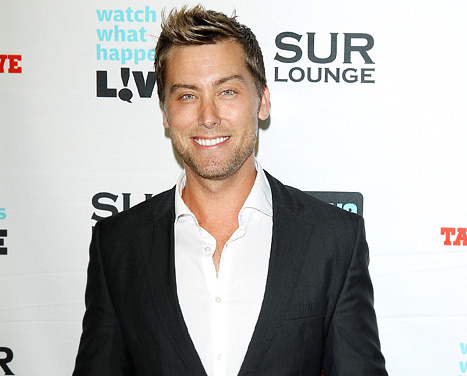 Lance Bass has said that Chris Brown using the homophobic slur word f**got is no better than using the N word to another person, in a recent interview. The former *NSYNC star is said to be furious after hearing that Chris had been making comments about Frank Ocean’s sexuality during their brawl nearly two weeks ago.

Lance feels like people say things sometimes without even realizing what they are actually hurting that person to question themselves if coming out was worth it after all. With Chris, however, he states that it’s an ongoing thing where you hear one thing about Breezy beating up someone, then you hear him apologize on Twitter, and then he’s back to acting like a crazy fool again. You never really know what you will get with Chris Brown – one minute, he’s one way and the next he’s another.

“Calling people f*ggot and that stuff – he may not even mean what he means, but it’s a derogatory term that people throw out there and without even knowing why they are saying it,” Bass told Celebuzz. “But when it comes to Frank Ocean and knowing that he’s very out… it was definitely meant to hurt him. It’s never good to throw those words out there that mean so much.”

“[Brown] should understand that being a black man himself. He should know that the F word is just like calling you the N word in a very derogatory way.” He continued: “When you come from a minority like that, being gay or black or whatever, it’s like there should be an understanding, like we all get each other. But you don’t see that a lot, which is really sad.”

The only thing that could really help Chris’ career and his mental health would be jail time, Lance says, reasoning to it being down to his character not being able to change — Chris always gets himself into trouble and it just seems to have become the person he is today. Only a certain amount of jail time could help Breezy understand how he’s behaving in the outside world is far from normal; beating women, snatching their phones and throwing it away, fighting with Drake, beating up Frank Ocean and calling him a homophobic slur word. That’s not normal behavior.

“I think everyone can change, [and] I hope that he can change his tune,” he said. “[But] we have all seen he hasn’t rehabilitated himself whatsoever. There is obviously a problem there. Really, the only way to solve that is, you are going to have to go to jail. They are going to put you locked up for a long time for you to really learn a lesson.”