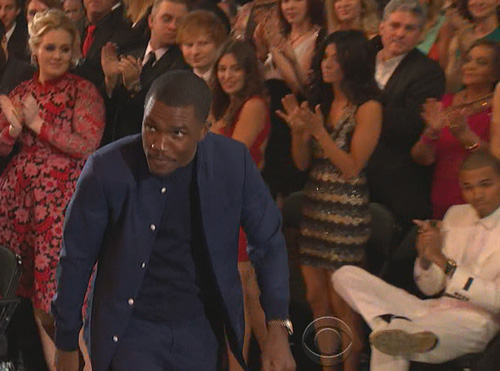 Wowza! Adele seemed to be really pissed off with Chris Brown when Frank Ocean won his Grammy; everyone in the building showed respect to the singer as they stood up and clapped for him except for Chris who sat on his bottom, slowly clapping as Adele stared over at him in disgust. She couldn’t believe how one person could be so naive.

And we kinda agree with her. You may recall the incident between Frank and Chris two weeks ago when Ocean refused to shake Chris’ hand and seconds later, he gets pushed, punched and pinned to the wall by Brown’s entourage before he decides to join in too. It was very uncomfortable to watch, and Adele didn’t like it at all.

According to sources, Adele was angry because the Grammys is a night where everyone comes together to congratulate people on their success and what they’ve achieved in the last year, so when she looked over and saw that Chris was being disrespectful by sitting on his butt and not acting like a grown-up man, she decided to confront him about it… and it wasn’t necessarily in a quiet way.

The 24-year old is a loud-mouth herself, it just comes naturally to her. LOLz. So when she asked Chris why he didn’t get up for Frank, everyone heard it which made Chris very uncomfortable. We don’t know why his reply was, but seeing by his facial reaction in the picture, it must have been something like: ‘Umm.. well… we got into a brawl two weeks ago and you know…’. Ha! Adele looked like she was about to slap the ish out of Chris.

What do you make of it? Has Adele got a point or does Chris have the right to stay seated and act like an immature little boy?