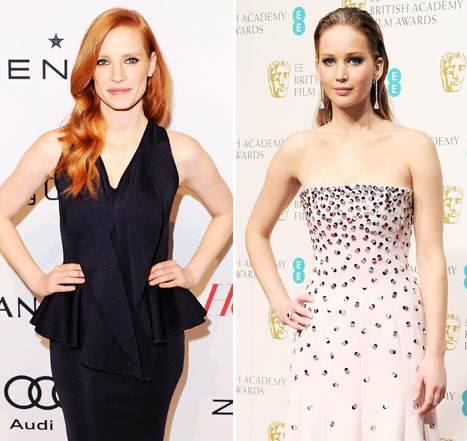 Have you heard the rumors about Jessica Chastain absolutely despising Jennifer Lawrence for being an obstacle this awards season? Both women have earned Best Actress nominations for every award under the sun and supposedly Jessica is tired of feeling like Jennifer has stolen her thunder.  This past weekend Jessica wrote a Facebook post blasting the rumors, insisting that people have it all wrong and there’s no rivalry.

“I think all of the actresses recognized this year have given incredible performances. But more important, they’ve all shown themselves to be filled with generosity and kindness. I’ve done two photo shoots with Jennifer Lawrence over the years and have found her to be utterly charming and a great talent. I’ve told her how beautiful her film work is.”

It’s great that Jessica is speaking out and wants to promote the idea of unity between the actresses and maybe they all aren’t involved in catty behavior and jealous spats. It is interesting that this post came fresh on the heels of Emmanuele Riva beating both Jessica and Jennifer. Riva won the Best Actress Award at the BAFTA Awards and I have to wonder if both ladies were stunned by the defeat. Clearly they have some competition other than themselves and maybe it gave them a reason to stop the stupid jealousy.

Let’s be real here, women like to have a common enemy and maybe Emmanuelle is it for Jessica and Jennifer. Maybe it feels better to share a dislike of this woman rather than resent each other! Women can be really nasty, we all know that! Do you think this surprise win helped to ease the tension between Jessica and Jennifer? Tell us your thoughts in the comments below!