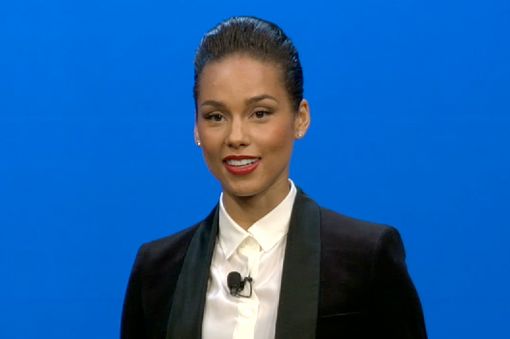 Alicia Keys has been caught tweeting on her iPhone despite the fact that she recently signed a deal with BlackBerry to promote their latest phone, the new BlackBerry Z10 who she happens to be the global creative director of. The singer had said she was “obsessed” with the new BB phone and wouldn’t want to trade it for anything in the world, but clearly that wasn’t the case when she sent out a tweet on Twitter with the sentence ‘Sent through Twitter app for iPhone’.

Alicia, who was present at Sunday’s Grammy Awards, had tweeted a line from Drake’s new single ‘Started From The Bottom’, as she wrote: “started from the bottom now were here!” Her loyal fans quickly noticed where the tweet came from and it wasn’t long before Alicia keys started trending over the fact that she is promoting the new BlackBerry phone but happens to be using an iPhone.

It’s unclear what BlackBerry execs will do about this, seeing that she clearly misbranded their new product by advertising Apple’s product, but if we were them, we’d sack her straight away. If we were representing a company’s phone, why are we even considering using another phone? No matter how much we hate it, we’d still use it… until our contract with that company ends. Ha.

Well, Alicia’s fans let her know her mishap, which prompted her to quickly tweet: “What the hell?!!!! Looks like I’ve been hacked… I like @Drake but that wasn’t my tweet :-(” Oh, so now you got hacked?! That’s a pathetic excuse, Alicia.