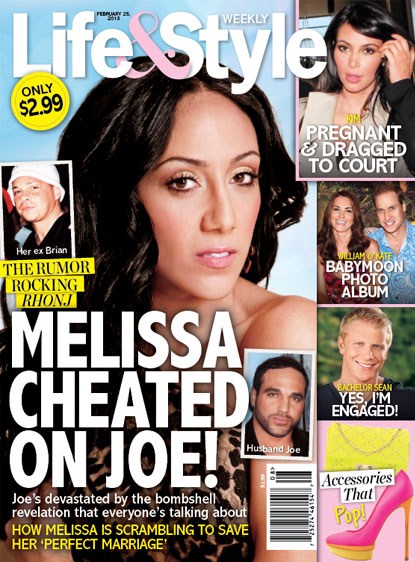 The current issue of Life & Style Magazine features the cover story, “Melissa Cheated On Joe!”  The magazine has the explosive story that Real Housewives of New Jersey star Melissa Gorga is being accused of cheating on her husband Joe Gorga.

Of course all the details of the affair will be revealed in the new season of Bravo’s RHONJ.  Is it a coincidence that the rumors come out just in time for the new season of RHONJ to air?  Call me suspicious, but….

Anyway Melissa is rumored to have had an affair with an ex, Brian “Bulldog” Bowen.  According to a source for Life & Style, “Melissa went out to dinner at Sushi Lounge, a local restaurant, and left early to go hook up with Bulldog.  Bulldog claims to have a lot of dirt on Melissa, and some of it is already coming out — and the next season hasn’t even started airing yet.”

Apparently during the filming of the show the ladies all talk about Melissa’s illicit affair.  Melissa of course denies the rumors and says they are all smoke, but no fire.  She thinks everyone is looking for their 15 minutes of fame, and what better way to get it than to stir up some rumors.

What do you think?  Will you be tuning into this season of RHONJ to find out all about it?