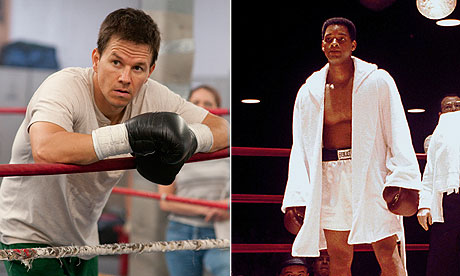 Mark Wahlberg and Will Smith could be entering the ring later this year if they sign on to fight each other in a Celebrity Boxing Match where the winner could win $1 million. According to Damon Feldman, who sent the offers to both A-list actors earlier this week, he says that he would be delighted to have Will and Mark beat each other up for fun for $1 million, but that money won’t be there’s to keep.

The cash will then be donated to whatever charity they choose – so in all fairness it’s a great deal when you consider the fact that $1,000,000 can save many people’s lives. If these two are going to be arrogant about it and act like they don’t need the money, they should think about the people that do. So far, there has been no word whether or not Will and Wahlberg will sign on, but the chances of it happening are likely.

Will is very much into kickboxing, while Mark loves working out, so boxing shouldn’t really be a strange sport to either of them. Oh, and the two happen to be buddies! Occasionally, they talk about upcoming movie projects and family life, so we can’t wait to hear what their next conversation would be like. Maybe like this: ‘I’m going to beat you up in the ring!’… but with a more friendly approach. LOLz!

Here’s what the Hollywood Boxing Federation, Damon Feldman, had to say: “This will be a great opportunity for both stars to fight in the Superbowl of Hollywood boxing and to donate millions to their favorite charities. It would be a great event too. Can you imagine? Come on, I really think that this would be a huge event and great way for them to donate to their favorite charities. We don’t think these two are going to rip each others heads off. We’re just hoping they get into the ring and have a little fun duking it out.”