2 Chainz Arrested For Possession Of Weed, Says Cops Just Wanted A Picture With Him 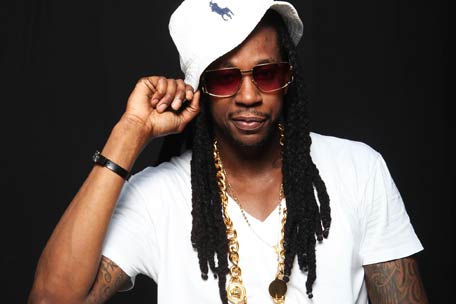 2 Chainz was arrested last night because the cops just wanted to be in the presence of a celebrity for a little bit, according to the rapper himself. He was taken to custody for the possession of marijuana after police pulled him and his SIX friends over — YUP.. but only he had to go to with the cops. Isn’t that crazy?

The incident took place at around 10PM last night in Easton; once they agreed to let him go, cops quickly asked if they could take a picture with the rapper, to which he didn’t refuse. But that wasn’t the point. The point was that 2 Chainz felt he had only been taken to custody because the two guys who brought him there just wanted to show their family and friends who they had met. Mind you, Easton isn’t exactly a place where celebrities usually hang out, so we can kinda understand why they did what they did. LOLz.

But as soon as the Grammy nominated artist made his way out the building, he took to social-networking site Twitter to express his feelings after being the only person to have been taken to custody: “dam police f*ckn wit a n**ga. Locked me up and then Wanted pictures smh (shakin’ my head).”

The funniest thing about the story was that there was actually no weed found in the car. The rapper says cops removed him from the white van he was driving in because he was carrying a grinder – what you’d use to crush up the weed in order to smoke it. Wowza! We feel bad for this guy — these police officers aren’t doing their jobs properly… just taking advantage of it.