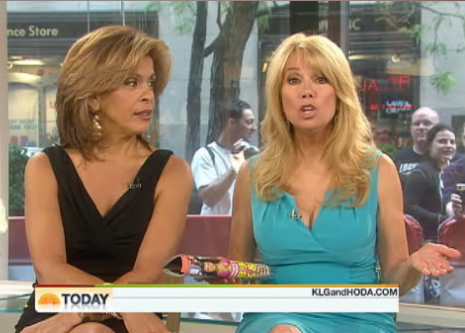 Hoda Kotb is trying to do everything she can to prevent her segment at he TODAY show to be moved from New York to Los Angeles, but the person who is standing in her way happens to be her good friend Kathie Lee Gifford who is desperate to relocate to LA.

NBC is constantly trying to revamp the morning show as the ratings continue to dip, so a move which would see Hoda and Kathie find a nice location in Hollywood to film at could be good as a business decision, but Hoda isn’t having any of it, according to TMZ. Kathie has already spoken to producers of the show who are very interested in the idea but they’d need Kotb to agree with this plan before they could go ahead with any further discussions.

Now, we all know that both of these women have strong personalities and neither one of them would want to back down from a good argument, but this one could end getting a little nasty, in terms of their chemistry on the show as they continue to film in New York for now. Sources say that there’s definitely tension between the two; Kathie kees nagging Hoda to agree but Kotb still isn’t convinced about the idea.

CAA – the talent agency that Hoda is signed with – says that one of the reasons Kotb doesn’t want to move to LA just yet is because she hasn’t been offered anything else besides her role on the TODAY show. Hoda has a lot of businesses running in New York, so if she was to move to Los Angeles, she’d have to have more things planned than just do a morning show and then do nothing for the rest of the day. Hoda wants to stay busy.