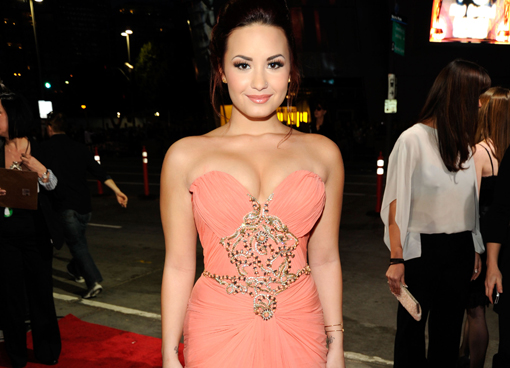 While it’s looking like Demi Lovato will definitely return for the third series of X Factor, alongside Simon Cowell, there are still two empty seats which need to be filled, and we’ve already been hearing that Ne-Yo will take over LA Reid’s spot, but who will cover Britney’s seat? The former Disney starlet has said that since no one has been suggested yet, Lady Gaga would be an amazing choice for the show.

She does make a good point; Gaga can attract millions of people to the show with her star power, but to try and get a huge singer like that to sign on would be difficult unless Simon is willing to offer up to $25 million. Gaga has a new album, titled ARTPOP, coming out later this year and she’s already planning a tour for 2014, so for her to suddenly say she would love to join the show is not really going to happen.

Lovato stopped by Extra to give her opinion on who she thinks she be the fourth judge on the show before adding that the person she chose may not be able to fit in time for X Factor: “I would love to see Lady GaGa. I don’t know if that is possible or not,” she admitted. Gaga wouldn’t have done the show anyway. She’s too famous to do something that can be looked as downgrading your career. Of course, if the price was right then do it, but not for anything less than $18 million.

Demi adds that she has not yet been confirmed to return to the show – yet we doubt she’ll get axed a she’s attracting a young audience – the singer says if she’s asked, she’ll hop on for the forthcoming series: “I’m focusing on my music this year, so it’s going to be a lot of touring, a lot of promoting of my album… but I would love to return,” she commented. “Obviously, if they asked for me to come back on [The X Factor], I’d say yes.”