Harry Styles And Taylor Swift Cause Chaos At The Brits Rehearsals 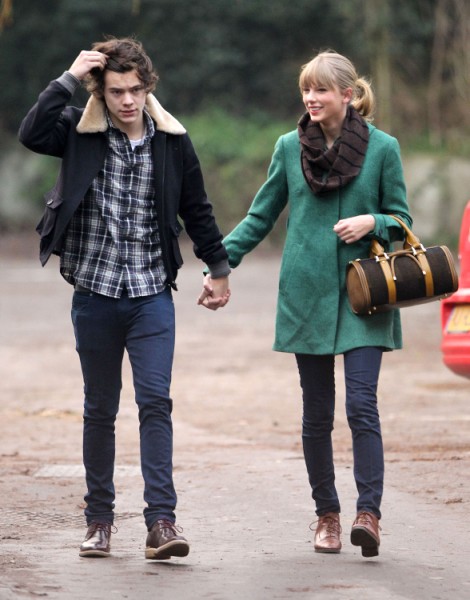 Harry Styles and Taylor Swift are causing a stir at the Brit Awards rehearsals, it has been reported. According to sources, neither of the two want to get anywhere near each other after Swift made the decision to dump Harry during last month. They have not spoken to each other since, and Taylor is still bitter about the fact that her One Direction ex-boyfriend didn’t even try and explain why he was flirting with other girls during their relationship.

Swift thought that maybe an apology from Harry could make it all alright again, but Styles fails to see what he has done wrong… he is just being himself and sees no reason to apologize to a woman who has dated every A-list in Hollywood. Rehearsals for Wednesday’s The Brit Awards started last week and Taylor and Harry are both scheduled to perform, however, producers of the show are annoyed because they had to rearrange everyone’s rehearsal schedule because Taylor didn’t want to see Harry.

As pathetic as it sounds, it doesn’t get any better when she realizes that she will definitely run into him on Wednesday night, so what’s the point of having the rehearsals changed just because you can’t get over your ex? Well, Taylor just happens to be very stingy and had producers force them to change at what time each performer comes on to the stage and rehearses their performance.

“It was a bit of an oversight to say the least. The original plans were drawn up a while back when Harry and Taylor bumping into each other wouldn’t have been an issue,” a source told The Sun. “But they’ve had to have a bit of a rethink now. Mumford & Sons were meant to be rehearsing on the Monday with Robbie Williams, Emeli Sandé and Ben Howard – but they were happy to switch. It could have caused a bit of a headache if the Mumfords kicked off – but fortunately they played ball.”

Harry and Taylor recently went to the NRJ awards, but managed to stay out of each other’s way throughout the night. So, what do you make of this? Is Taylor just a childish little girl, or does she have a valid point as to why she’s trying to ditch Harry whenever she can. If she was that upset about seeing him, she shouldn’t have signed on to perform in the first place. Ugh.