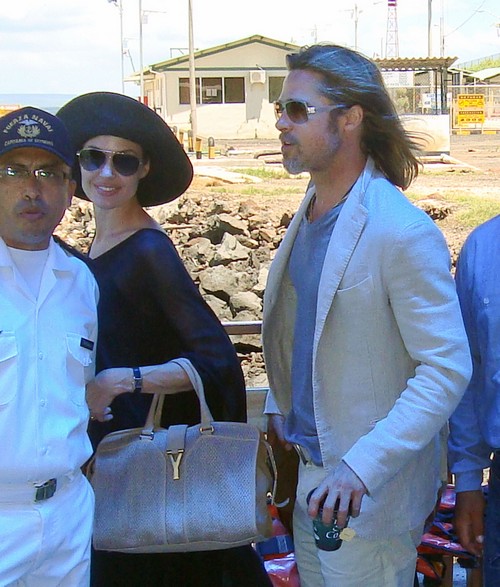 Maybe that wedding between Angelina Jolie and Brad Pitt isn’t imminent after all! As their fans have fixated on the couple, their children and guessed at wedding details, it seems that they have hit a brick wall in their relationship. Angie broke one of the golden rules of dating and marriage- never let your partner know that you’ve been with better!  Back in January Brad caught Angie admitting that she thinks he’s a so-so lover. His free time has been one long bender ever since. The actor is reportedly downing tons of his favorite beer and runner up choice, red wine.

According to The National Enquirer Brad overheard Angie talking on the phone with ex Billy Bob Thornton and she told him flat out that Colin Farrell was the best lover that she ever had!

“Brad left their house in Los Angeles one day in January to run errands. But he forgot his wallet and headed back home af­ter only a few minutes. As he walked into their bedroom, Brad overheard Angie say that he was a great guy, but Colin was the best lover she’d ever had! Then Angie told Billy Bob that her love life with Brad had gone cold, and she missed the wild, passionate sex she’d had with Colin!”

Being with Angie can’t be easy in the first place and I suspect that she doesn’t mind looking for opportunities to take shots at Brad, but him over hearing that she had better sex with Colin will probably kill any desire he may have had to screw her. Such a total shot to his ego was probably a crushing blow to take!

Will these two ever actually become husband and wife? Do you see them married or just together for years, until it’s over?  Tell us your thoughts in the comments below!