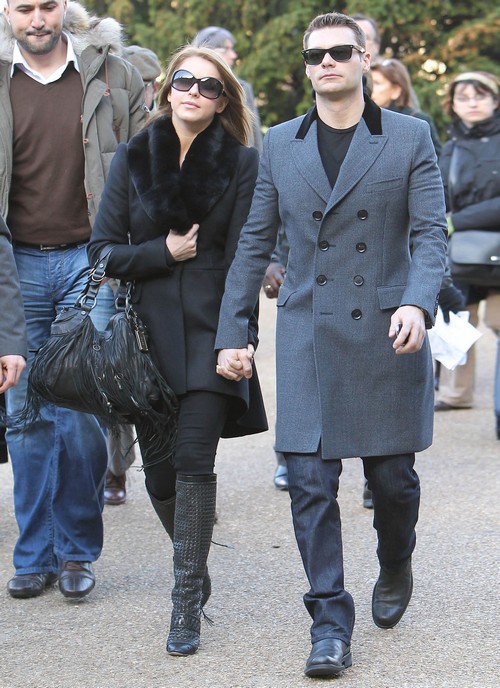 OMG – Ryan Seacrest could have died after flying to Las Vegas with his very untalented girlfriend Julianne Hough (who stars in many films that constantly flop). The American Idol presenter was said to have been left “shocked” when their British Airways flight was forced for an emergency landing while the 266 passengers were ordered to put their oxygen masks on immediately.

Wowza! Well what happened, you may be asking. Bosses at British Airways have yet to leave a statement on why they almost had Ryan and his annoying girlfriend put in caskets during the short flight trip. A passenger told Britain’s Sunday Express: “The pilots actually put on their oxygen and the other stewards were sick.”

A representative for the company has revealed that they are investigating the aircraft, making sure that they thoroughly check the engine problem that almost had everyone die tragically. Sources say that Ryan has a very good chance of suing British Airways, and so do the other passengers, because it looks like their team didn’t fully check the status of the plane before takeoff, which is bizarre, considering that it’s vital to always make sure everything is working fine.

OMG – could you imagine if Seacrest had died? Who would have hosted American Idol?!? Oh my goodness. As for his “girlfriend”… she just released another romantic film alongside Fergie’s husband, who is also irrelevant, but happens to go by the name of Josh Duhamel. The film is going to flop drastically so there’s no point of us even promoting it by saying its name. LOLz.