Kim Kardashian Used Kanye West As A Sperm Doner, It’s All About The Money 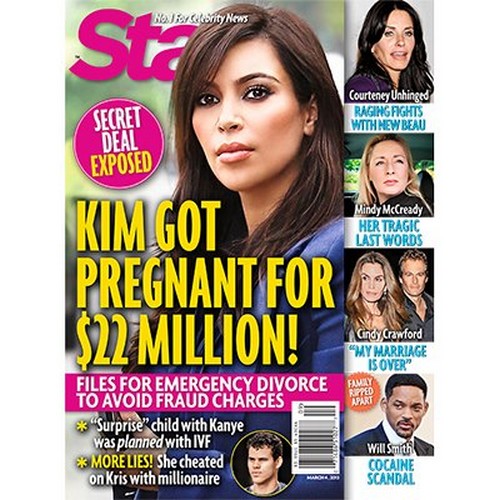 Kim Kardashian has been jealous of anyone happily married, with kids for years. I mean how many times did we hear about it on her reality show. Kim believed she’d be happily married by age 30 and was absolutely crushed when it didn’t happen. She rushed into a marriage with Kris Humphries and bailed when she realized that he wasn’t going to give her the dream that she had in mind.

According to Star Magazine, Kim set her sights on Kanye West and immediately launched into baby mode. She was on a mission to get pregnant even though everyone around her believes the pregnancy was unplanned. A source claims that Kimmie and Kanye were constantly having sex and even the self absorbed rapper thought it was weird!

“She totally used Kanye for his sperm — she’s been on the hunt for a sperm donor ever since splitting from Reggie Bush. As soon as she realized that Kris was a bad choice for a father, Kim ditched him and went after Kanye.”

Do you think that Kim was hell bent on getting pregnant? On Kourtney and Kim Take Miami she talks about quitting her birth control so it sounds to me like, at the very least, she wasn’t NOT trying for a baby. The question is, did Kanye know? Kim’s whole family is shady when it suits them. Would you really put it past her not to intentionally lock Kanye into a surprise baby? She’s used to getting whatever she wants and it sounds like what she wanted most was to be pregnant.

Did Kim set Kanye up? Will they last as a couple or is this just a relationship of convenience? Tell us your thoughts in the comments below!