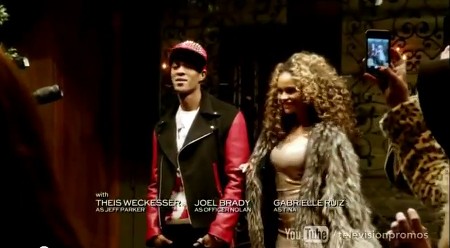 Leave it to the Law & Order franchise to actually go THERE. The series, in it’s four different incarnations has always been known for its ripped straight from the headlines approach. I have to say, I’m actually shocked that it has taken them four years to do a story similar to the real life drama that played out between Chris Brown and Rihanna after the Grammy Awards in 2009.

Now, Law & Order SVU has decided that it’s time to tell a story very similar to the night that Chris beat the crap out of Rihanna. In their version a young singer is beaten up by her hip hop boyfriend who closely resembles Chris Brown. The story ends badly when the young singer refuses to prosecute her abuser and instead stands by his side. Hmmm does that sound like anyone that we know?  Rihanna at first went after Chris but obviously she didn’t learn much from the whole incident as the two of them are an on/off couple depending on their fights and how the day is going.

According to Calvin Blanco, “The central players in “Funny Valentine” are Micha Green, played by Tiffany Robinson, and Caleb Brown, played by Eugene Jones. He regularly beats her, which leads Detective Benson (Mariska Hargitay) to wonder why she stays in the relationship.”

To see the video preview head over to Calvin Blanco!

Apparently many of Chris’ fans (yes he has them) are fuming over the episode. They just can’t grasp why their hero can’t seem to catch a break. Even four years later the media is holding him accountable even if Rihanna won’t! Are you glad to see Law & Order SVU boldly take on this story and do it some sort of justice? I mean if Rihanna is choosing to return to her abuser then someone somewhere should point out what a bad idea it is, right? Tell us your thoughts in the comments below!