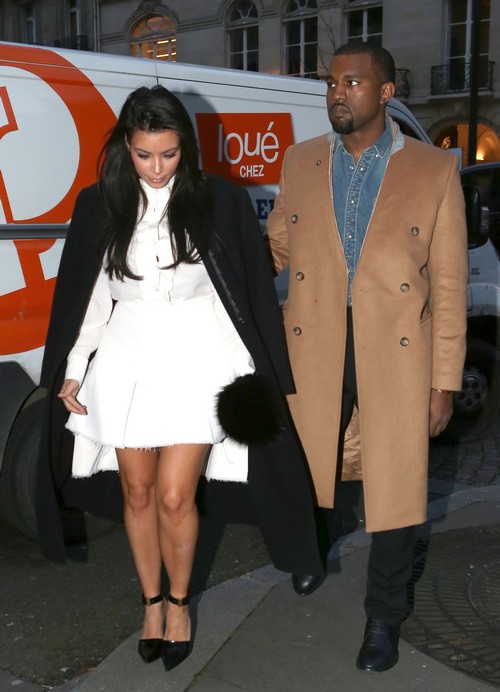 Kim Kardashian has once again taken to her blog to explain how much of a great boyfriend Kanye West really is. The reality star even goes on to say that she didn’t know what the word ‘privacy’ actually meant until she started dating the rapper last year February. Taking to her website to also clarify reports that she’s leaving her reality show, the 32-year old explains that she’s not going anywhere,- she just wanted to address that she needs privacy sometimes.

OMG!!! And there was us thinking she was going to get the hell out of reality television and we could all live happily ever after!! Ahhh. Well, whatever – the ratings for their shows are tanking anyway, so they’ll be gone soon… hopefully. So off topic, but had to be said! Ha. Anyway, Kim clarifies that she values privacy more than ever now that she’s pregnant and is starting a new chapter in her life, saying that the recent interview she did with Du Jour magazine was “[taken] things you say in an interview out of context” by the media.

When talking about having to have “boundaries” in her relationship, she writes: “I have learned to understand that it’s important to have boundaries, especially when we are having a private date night dinner. So if someone came up to the table at dinner, I used to get up, take pics and sign an autograph in the middle of our meal.”

“Now, I know that this time is our private time, and I absolutely will as soon as I’m done eating! It’s not that he won’t let me sign autographs for my fans… far from it! Just as soon as we’re done! Totally understandable!” She added: “I have learned to understand the importance of privacy and boundaries, something that I haven’t really learned to embrace before. I adore my fans so much, and hate that sometimes things get twisted to seem a different way! I hope this makes sense!”

So all we really learned from this is that she no longer gets up at the dinner table to pose for a picture with a fan. And, let’s not forget that fan could have been buying all of her fragrances, clothes and all that other crap — so she can’t even stand her fat a$$ up and appreciate them for spending so much money on her?!? She needs to just shut her mouth with her stupidity.