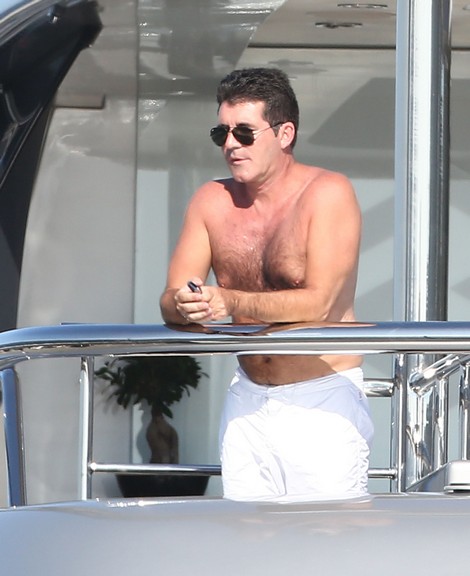 Simon Cowell is looking for a new girlfriend after calling it quits with actress Carmen Electra. The two were dating for roughly a month before Simon called off their relationship due to his busy work schedules – she happens to live in Los Angeles while he’s now filming the audition stages for Britain’s Got Talent in the UK. Work just always started to get in the way of things, but it hasn’t stopped him from trying to find someone new.

It seems like Carmen didn’t want to be dating someone who would be traveling the world from week to week and needed someone who was more relaxed with their career. A girl that is willing to put up with Simon’s schedule must be hard to find, but the music mogul says he’s trying to find the right woman who can follow him on his journey and make some sweet love to him, adding that Carmen “was fun”, but he’s looking for something more than her. Ouch!

“I’m now a single man. We spent time together and she is so much fun. But I’d like to find a girlfriend,” Cowell told The People. “I do particularly like British women but I haven’t got my eye on anyone. I do work a lot and it doesn’t leave me very long for women but I have lots of great friends and great women in my life. I’m lucky that I have a lot of good people around me. That’s very important, especially when you do what I do. I’m happy but I would like a girlfriend.”

Meanwhile, when asked about his relationship with his boy band, One Direction, who pretty much found fame from his talent show, X Factor in the UK, Simon adds that he’s incredibly proud of the success they have received over the last 12 months, and only wishes them the best in the future to come: “One Direction [are] my boys and I love them,” he said. “I’m so proud of them. They are having the time of their lives and I’m happy for them.”

Wait – what?!!? Simon can actually be nice to people?! What a shocker.