Rihanna – Once Again – Shares Her Love For Chris Brown: “He’s Not A Monster” 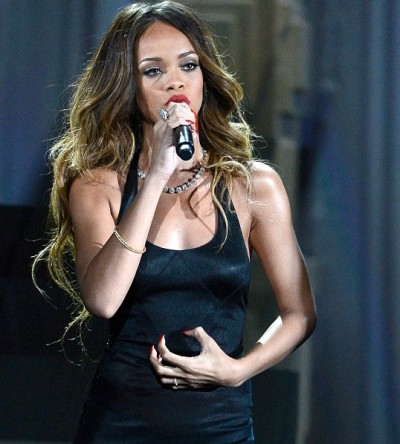 Rihanna has once again defended Chris Brown‘s actions by stating that her boyfriend is not a monster… well, not anymore. The Bajan-beauty, who got knocked out by her beau in 2009 because of his anger issues, explained that Chris has very much matured over the years, realizing that his actions were wrong and has since learned from his mistakes to better himself as a person.

Umm… so how does she explain the fact that Chris beat up Frank Ocean last month? Or, how Breezy ended up in a brawl with Drake at the W.i.P club in New York? I mean – this chick is starting to make herself look real stupid over the fact that she’s not opening her eyes to realize Chris has not changed one bit; once a beater, always a beater. Sure, he may not be hitting her anymore, but that anger he may have for her is now being used on innocent people like Frank Ocean.

“For a long time he was really angry… there’s so many reasons why I ever reconsidered having him in my life,” she tells The Sun. “He’s not the monster everyone thinks. He’s a good person. He has a fantastic heart. He’s giving and loving. And he’s fun to be around. That’s what I love about him – he always makes me laugh.” Do you believe any of that? We can’t take Rihanna serious anymore — it’s almost as if Chris begged her to release a nice statement about how he has changed his ways… blah blah blah.

Oh and she even had the nerve to talk about starting a family, saying: “Hell yeah, but I wish I could order them.” I’m assuming she’s referring to the fact that she’s incredibly busy with her career that she doesn’t have time to carry a baby for nine months. She’s so weird and crazy, don’t you think? She has time to spend with a man beater, but no time to start a family? Guuurrrrllll, you trifling.

Maybe Chris should try and fight us! We’d knock the ish outta him!!