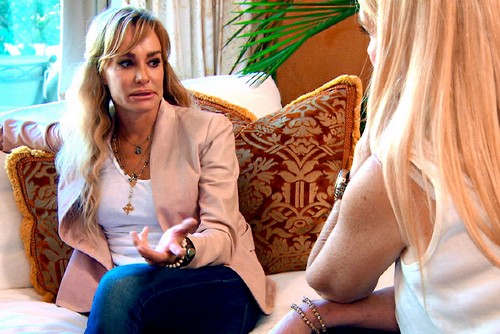 Tonight on Bravo The Real Housewives of Beverly Hills returns with a new episode.   On last week’s Kim revealed her new post-surgery nose with a party in her backyard. When Taylor called to say she won’t be attending, Kim and Kyle was shocked — not just because Taylor was jetting off with a new love, but because she didn’t know where her daughter was.   Did you watch last week’s show? We did and we recapped it here for you.

On tonight’s show prompted by a disturbing phone call earlier, Kim and Kyle confront Taylor about using alcohol as a crutch. Taylor then turns down a group trip to Paris in order to spend time with her daughter. The rest of the ladies, however, jet off to the City of Lights for fun and fireworks. They’re worried, however, when Kim is late then acts increasingly strange, in a way reminiscent of her life before rehab. Lisa and Ken also take a side trip to San Tropez, where they reunite with Ken’s grown son and his much-older wife, who was once a friend of Lisa’s.

Be sure to tune in for our live coverage of the show tonight at 9 PM EST!