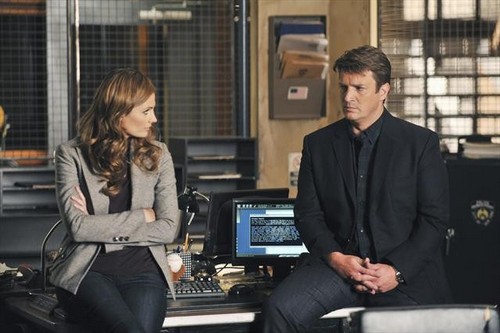 After a 3 week hiatus March 18th, 2013 a whole new episode of CASTLE airs on ABC called, “Scared to Death” and we have gotten our hands on some spoilers and a sneak peek video for your enjoyment.

On last night’s show in the powerful conclusion of a two-episode story arc,  the FBI failed to get Castle’s daughter back, so Castle took  matters into his own hands, he reached out to a shadowy fixer to help him recover Alexis. But Castle soon learned that his daughter’s kidnapping was part of an even more sinister agenda.  Did you watch the show?  We did and we recapped it here for you!

On the next episode which we sadly have to wait for a couple of weeks, when a young woman seems to have been “scared to death” after watching a “haunted DVD,” Castle and Beckett encounter their scariest case yet. The pair are sent to an asylum with seemingly supernatural happenings and Castle fears for his own mortality after accidentally watching the video.  Yikes, sound great.

Castle “Scared to Death,” airs March 18th, 2013.  Check out the sneak peek video below of the episode!