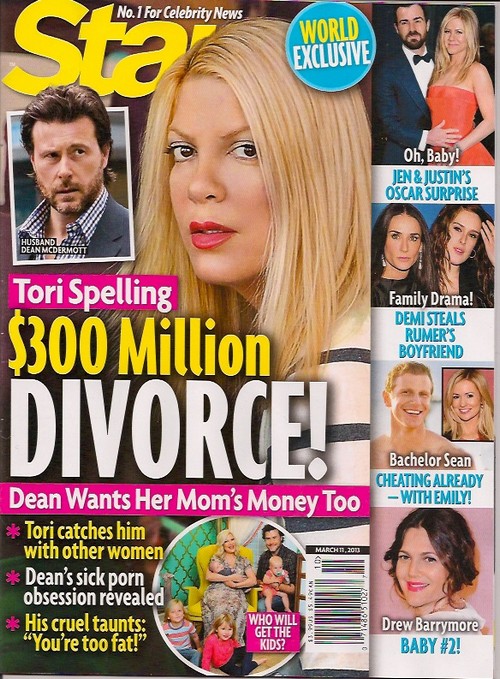 Early 2013 seems to be the season for crumbling relationships and surprising celebrity splits.  This morning we’re hearing that Tori Spelling and Dean McDermott are on the rocks. Supposedly Tori is sick of catching him with other women while she juggles their four children on her own. The couple has battled rumors in the past but still continued adding onto their family which seemed to send the opposite message to the negative media reports. Now it seems that Tori has gotten smarter and according to Star Magazine she has hired some help,

“Tori believes Dean has been seeing two different women for years. She’s so suspicious, she monitors his email and put a tracker on his phone. She’s even had a private investigator follow him who’s allegedly discovered that McDermott has some suspicious relationships with other women.”

The mag also alleges that it’s Dean’s sex addiction that has led to all the behind the scenes problems for the couple. With Tori threatening divorce Dean has supposedly taken a good look at the couples financials and is ready to battle over the estimated  $300 million that’s at stake. Don’t forget, this is a couple that also functions as a business. Between their reality shows, products, website and Tori’s books they rake in a lot of money.

Personally, I thought they seemed a lot tighter after Tori’s health scare connected to her delivery of baby Finn last August.  They seemed grateful to have each other and the family intact. At least that’s what I thought I was seeing. Could they really be ready to split? Do you believe the reports? Sex addiction unravels a lot of seemingly good relationships, could it be an issue in their’s as well? Tell us your thoughts in the comments below!