Taraji P. Henson Is An Angel For Animals In New Peta Ad 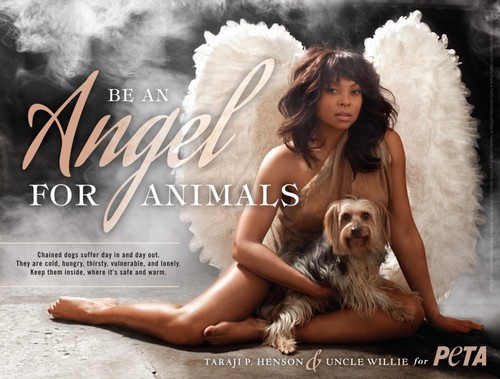 As winter’s cold temperatures continue across the U.S., award-winning actor Taraji P. Henson is heating things up with a steamy new PETA campaign, in which she appears dressed in a short gossamer gown and a pair of synthetic, cruelty-free wings next to the words “Be an Angel for Animals.” The ad, which was shot by top celebrity photographer Don Flood, goes on to stress that “chained dogs suffer day in and day out. They are cold, hungry, thirsty, vulnerable, and lonely. Keep them inside, where it’s safe and warm.”

As part of the PETA winter campaign, Henson also appeared in a video that encourages people to sponsor PETA doghouses for dogs in southeastern Virginia and northeastern North Carolina—where some dogs have no shelter at all—and sat down for an exclusive interview, in which she opened up about her costar in the campaign, her beloved dog, Uncle Willie. “I never thought that I could be so in love with an animal until I had Willie,” she says. “He’s our family. … He’s just the best companion. Dogs to me are like children … they’re the closest thing to God. They’re so pure in their love, and all they do is aim to please.” Henson also discusses her rewarding experiences volunteering at animal shelters with her son.

Head over to Diva Whispers to see the video of the CAMPAIGN HERE!