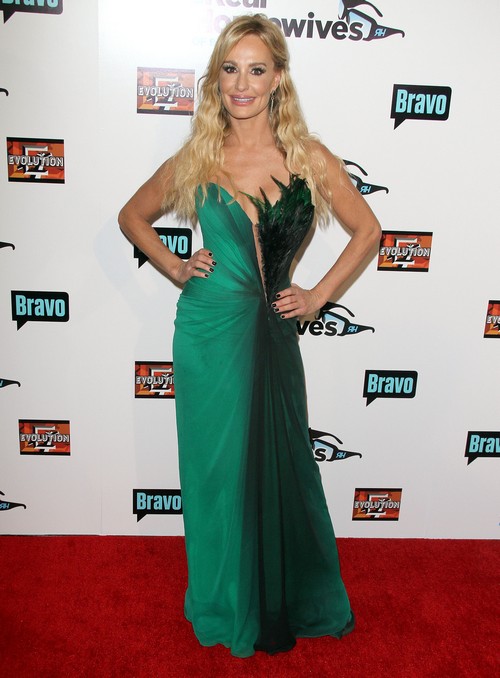 Seeing how her emotions have been played out on the Real Housewives of Beverly Hills, it shouldn’t come to a shock that Taylor Armstrong found comfort in alcohol after her estranged husband Russell Armstrong committed suicide in 2011. Russell abused Taylor on several occasions throughout their marriage; calling her vile names and even dislocating her JAW – so we can’t even imagine what Taylor must have been thinking at the time of the tragic incident.

Armstrong, who was left in a nasty financial mess at the time has taken to her official blog to share with her fans the pain she was going through at that time of her life was becoming too much to handle. She didn’t know how to fix herself, and eventually decided that the only way she can clear her mind from all the bad things that were happening in her life was to drink alcohol, which quickly became a habit of hers that led to her drinking problems.

“I went through about nine months where I was drinking to cope with the pain and the memories,” she said. “I was drinking to forget, to stop the recurring images in my head, to relax enough to try to sleep at night. I quickly discovered that one glass of wine made it a little easier, two would help me forget, three, four, you get the point.”

The reality star went on: “I was self-medicating and the sad truth is that I didn’t know another way to get through the days – and nights. I was confronted with the truth that the life I thought I had was only an illusion. What I finally realized was that ‘pain waits for you’. I would medicate for a day and the next morning all the emotions would come flooding back – not to mention the massive headache.”

There were reports going around that had Taylor not been put through the disastrous years she faced in 2011-2012, she would have not been asked to come back to the Real Housewives of Beverly Hills, due to her dull behaviour on the show. However, the overwhelming sad parts that have been happening in her life have supposedly given producers to keep Armstrong on for at least another two season. Taylor continued on her blog: “I’m coming home to Beverly Hills as a new woman with my past behind me and a new life in front of me.”