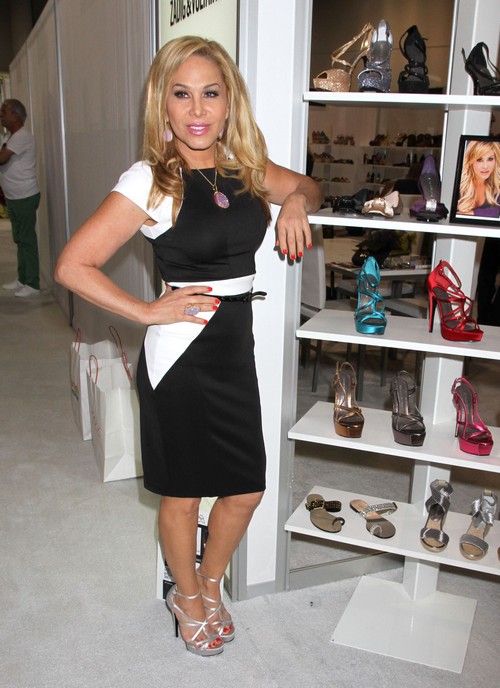 Adrienne Maloof has not only made it clear she’s not going to sit down for the Real Housewives of Beverly Hills reunion, but she has also threatened to quit the show entirely. Here’s why: Since filing for divorce from husband Paul, the reality star has been prohibited from talking about almost anything, including her children, her marriage and why it all came crashing down.

Adrienne feels that since she can’t open her mouth on any of these subjects, she has no reason to be sitting at the reunion for hours, listening to all the stories her castmates have to share while she can’t say anything. Maloof also thinks that if she was to attend, everyone – especially Brandi Glanville – will end up attacking her, which could potentially make her spill something she shouldn’t say and get her into big trouble.

Bravo is totally pissed at the fact that Adrienne will be bailing on them for the reunion since it clearly states in her contract that she must be present at the reunion,- no excuses. Well, it certainly doesn’t look like she’s going to be following the network’s rules — and in a way, it’s understandable from where she’s coming from. Viewers would wonder to themselves why Adrienne is there when she can’t even talk about anything interesting; the stories about her botox and surgery are boring to hear now, so she may as well just not be there. No one will notice anyway.

On top of that, Glanville is supposedly very good friends with a lawyer that Maloof had been working with in recent years, which has raised suspicion that business discussions that Adrienne had shared have been discussed between the lawyer and Brandi. So, if you think about it — if Adrienne goes to the reunion and pisses off Brandi, she’s going to dish on all the things she has been talking about with her lawyer, which could make things get real ugly.

We wouldn’t that to happen now, do we? Ha! According to TMZ, Adrienne is already considering leaving the show for good; her life is a mess right now and the show just doesn’t seem to be making things any better, except for the nice paycheck she tends to get each season. She supposedly makes around $250,000 for a full run. Enough to get more surgery done, right? LOLz.