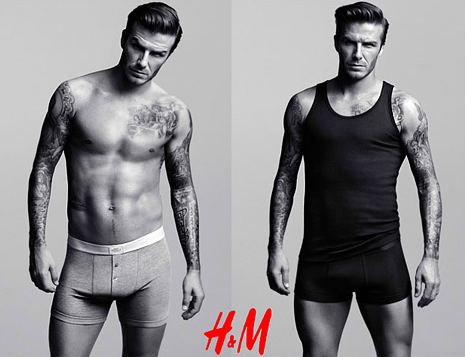 David Beckham works hard to look the way he does, so it’s no surprise he would immediately slam reports that he used a body double in his new H&M commercial, where he is seen chasing after a car after losing his bathrobe. Clear shots of his bum can be seen throughout the video, but sources said it wasn’t actually him.

The reason why this is been speculated is that – if you look closely in the video – you can see in some scenes, there is a man with no tattoos on his body, and if you look at David, he’s covered in them. This is what reports are claiming, and when we watched the video back, we didn’t see this man without any tattoos, but whatever! Beckham was still pissed about it and took the time to set the record straight.

During a recent interview on live television in France, the soccer player was questioned whether or not he used a body double for those close-up shots on his buttocks, to which he responded to saying: “I can confirm that’s my bum. I can say the crotch is mine and the backside is mine as well. Someone said that I had a stand-in for my bum, but no, I can confirm that’s my bum.”

Ridiculous, right? Why would he use a body double? He’s an athlete — of course he’s going to be looking physically fit for the commercial. He’s not going to be looking fat, is he? This must be the funniest things we have ever heard, and quite honestly, we feel bad that David has to even address these reports that claimed such nonsense. What do you think?!