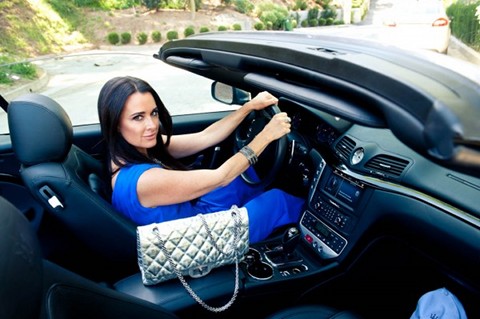 Kyle Richards is a classy lady – most of the time – so it’s understandabe to see why she’d be outraged when someone calls her something very rude, and Brandi Glanville did just that. The ex-wife of Eddie Cibrian recently sat down for an interview with Howard Stern, where she described her Real Housewives of Beverly Hills castmates as a bunch of c****… in other words, the c-word.

If you watch the show, then you know that Brandi’s vocabulary isn’t filtered – she says it how it is and won’t sugar code it – which I kind of respect her for, but sometime she uses it in the wrong way. She had no reason to describe every single one of them as the c-word, did she? Well, Kyle is pissed about it and has vented on AllAboutTRH.com.

“Disgusting. I think it’s really disgusting and the truth is I’ve been so nice to Brandi and really have gone out of my way to try and get to know her especially after last season,” the reality star explained when discussing how she felt about the Howard Stern interview. “She thinks, ’Since I have no filter, let’s see how I can shock everyone’ and just says whatever. But I feel like if you’re nice to my face and tell me you like me, why must you say something horrible about me to the press? I just think she doesn’t really consider other people’s feelings when she talks to the press.”

Kyle is not happy with Brandi’s attitude at all, because at times when they film scenes for the show, Glanville is really nice to her but then when she’s doing interviews, she seems to just try and make everyone laugh and gain some kind of attention from it. “Every time we’re together we actually have a lot of fun and laugh. I made a point to try and get to know her off camera and have even said I really enjoyed the times we’ve had together and one minute we’ll have fun and laugh and the next second she’s saying something hurtful about me or the other ladies to the press.”

Can’t wait to see what will go down at the reunion! Ha.