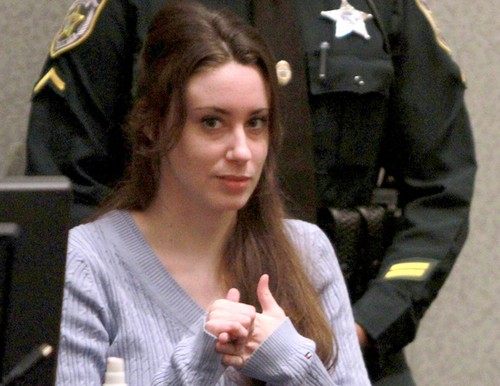 After being hidden under a rock since she was acquitted in the death of her daughter Caylee Anthony, Casey Anthony is headed to court today.  It seems that Casey is a deadbeat and does not pay her bills and her debtors want more that $800,000 back from her.

Casey expected that after she was acquitted she would get the big payola $$$ but that did not pan out.  She totally underestimated how guilty she looked, how people felt her acquittal was a miscarriage of justice.   Most people believe Casey got away with murder and the book deals, movies and TV shows she expected never materialized and there was no $$ for Casey.

Casey filed for bankruptcy in January 2013 and claimed she had no job and only $1,000 and was unable to pay her $792,000 in debt.  Included in the debt was the fees for her criminal defense.

Casey will be in court in Florida today to face her debtors and try to hammer out a deal.  Not only does Casey owe a crap load of money but she is being sued civilly by Zenaida Fernandez-Gonzalez for defamation of character.  Casey told investigators who were looking for her daughter that a babysitter named  Zenaida took the girl.

If Casey is successful in her bid to get her debts cleared it will enable her to get a fresh start.  Note to Casey:  You may be able to clear your debts, but you cannot erase people’s memories!