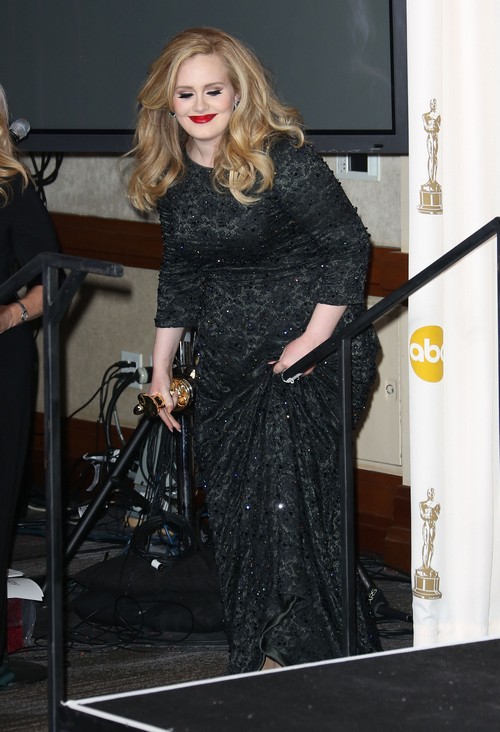 Adele has supposedly told Jennifer Aniston she is unsure whether or not she is in the mood to play at the actress’ wedding reception, since she’s currently just focused on being a good mother to her son, Angelo, it has been reported. The two became very good friends after they had met at the Oscars – they were said to have been constantly talking about everything; from acting to music and even pregnancy! Ooh lala.

As the night came to an end and Jen went home, she realized that she just had to have Adele at her wedding,- it was a perfect choice seeing that Aniston had been a big fan of her music since the singer released her top-selling album, 21, and the fact that they are good friends now could have only boosted those chances of Adele saying yes, right? Nope! Just because they are pretty close now still does not mean that the British-born starlet will just go ahead and do whatever someone tells her to do.

After having been approached with the offer to sing her her wedding as she marries her fiance, Justin Theroux, Adele supposedly told the former ‘Friends’ actress that she was unsure whether or not she would do it or not — that isn’t a no, but it isn’t a yes either. Jen is expected to walk down the aisle sometime in May, the same month that Brad and Angelina Jolie are tying the knot, so for her wedding to be better than theirs, she has to have someone incredibly famous to get Angie’s blood boiling, surely. Ha.

And insider shard: “Adele absolutely adores Jen. Jen mentioned to her that the [wedding] would be around her and Justin’s anniversary in May. She told Adele she should come along, and that she’d be honored if she’d sing at the reception. I’m sure Adele was really flattered and said she’d think about it,” before adding the two have been very chitty-chatty over motherhood: “Adele is such a proud mom. Jen’s been quite open in the past about being broody and wanted to hear all the details of how the first four months have been for her friend. Adele admitted that it’s exhausting, but she says it’s totally worth it.”

What do you think!? Is Jen just using her to perform at her wedding or is this just a genuine offer?