Ben Affleck and Jennifer Garner Marriage Is In Crisis 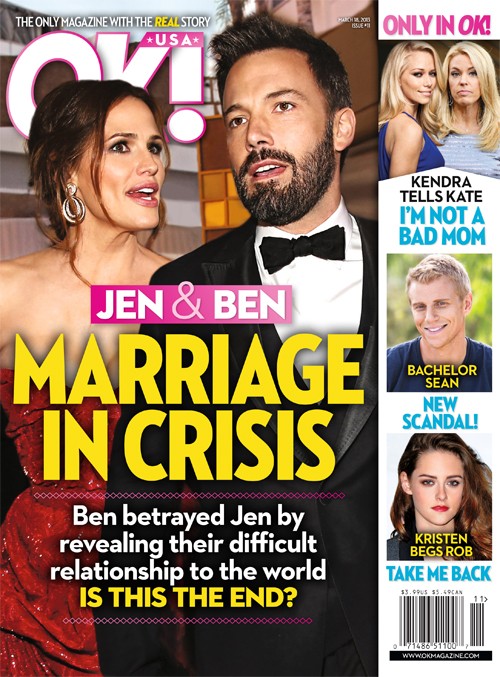 Ben Affleck and Jennifer Garner have reached their tipping point as they have agreed to file for divorce papers, OK! magazine’s latest issue states on the front cover. The actor and his wife have finally called it quits after eight years of marriage, blaming their constant fighting for the reason they just couldn’t do it no more – it’s been like this for over a year and even therapy hasn’t done any good for them.

Their therapist had told the couple that once way to get over problems and issues are to communicate and support one another, which Jennifer and Ben both have been doing in recent months; we saw Jen at the Golden Globes earlier in the year and at the Oscars, where she came out to show that she was there for him, but his Academy Award speech after winning a gong left everyone puzzled, before realizing what he had actually tried to say. Their marriage was a mess.

The actor had said: “I want to thank my wife who I don’t usually associate with Iran. I want to thank you for working on our marriage for 10 Christmases. It’s good. It is work but it’s the best kind of work and there’s no one I’d rather work.” It’s a fair point that no marriage is perfect, but to then address your issues with your wife on stage, to 40 million viewers at home is a little bit dramatic, don’t you think?

Well, the mag continues that Garner was completely blindsided by what Ben had said on stage, seeing that he had planned an entire different speech if he won an award — this just made the actress’ decision to end their marriage even more known. We never thought that these two were the type to go through deep-felt arguments that could lead to a divorce, but maybe Ben is missing them days with Jennifer Lopez? Who knows! Only time will tell.