Is Kate Middleton Having a Daughter? 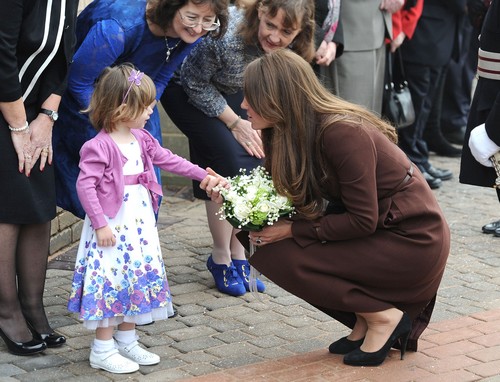 One slip of the tongue and the internet lights up completely with speculation. Yesterday Kate Middleton made an appearance in the fishing town of Grimsby and more than 2,000 fans were on hand to greet the Duchess. Diana Burton gave her a teddy bear for her baby and Kate was caught on camera saying, “Oh is this for our d-” and then stopped herself mid sentence. Someone nearby asked Kate if she was having a girl and of course a startled Kate said they were unsure of the baby’s gender.

Needless to say this is one of the top stories of the morning. Is it a girl? Probably. It’s a pretty common slip for an expectant mom that is trying to keep gender a secret. Do you think the royal family will be disappointed if it’s a girl? I’m betting Prince William would be thrilled because it was well-known that his own mother, the late Princess Diana had always hoped for a daughter herself. I’m sure he would imagine his mother smiling down on the couple and her grandchild.

What about Queen Elizabeth, the 86-year old monarch who is steeped in old traditions? Is she hoping that William adds a son to the royal lineage or might she also be happy with another princess being added to the fold? Do you think that the couple would ever admit their babies gender before Kate actually gives birth? Would they let the world know what to expect or will they choose to keep it a secret until the magical deliver date? If it’s a girl do you think that Kate and William will name her after Diana? Doesn’t it seem incredibly likely and an almost necessary tribute? Tell us your thoughts in the comments below!