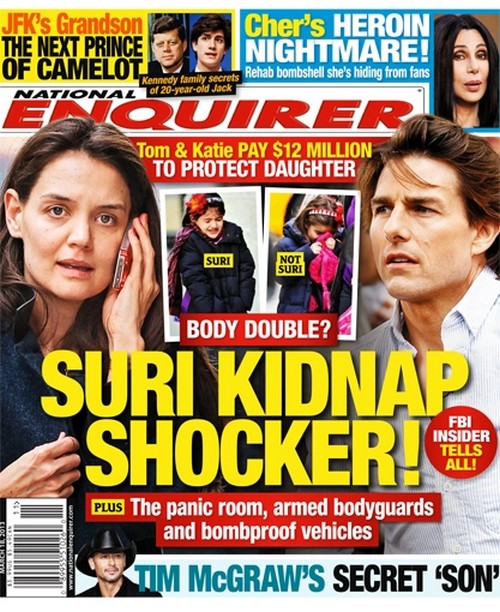 Tom Cruise and Katie Holmes have managed to agree on at least one thing since their divorce… they need to protect their daughter Suri Cruise. According to the latest issue of The National Enquirer, the duo have come together in force to do everything they can to make sure their little daughter isn’t handled in the wrong way by all the attention that has been surrounding her ever since mommy and daddy filed for divorce, thanks to Scientology. Ugh.

Tom has been in contact with Katie for the first time since their divorce,- they haven’t spoken until now, an FBI insider explains to the mag. Suri is said to be extremely scared about the photographers getting so close to her that she has even started telling Katie she doesn’t want to leave the house if all the paparazzi are going to be screaming at her wherever she goes.

Katie reached out to her ex-husband who didn’t hesitate to spend a whopping $12 million to protect his daughter; including a new home that has a panic room in case any intruders get into their home, armed bodyguards protecting the building 24/7 and bombproof vehicles – which seems to be a little over the top, but Cruise loves his daughter more than anything and isn’t going to take a risk on having anything happen to his little girl.

The mag claims that Tom’s generous offer to have all of this set up, spending millions of dollars just to protect his daughter has made Katie reminisce about the good times she had with Tom. She wants to stay in touch with Tom and remain good friends with him, mainly because he’s a good person but Scientology seems to always get in the way of things. She has no plans to reconcile with him, but hearing from Tom every now and then is a healthy way to start their communication again.

Calvin898 posts38 comments
You might also likeMore from author
InTouch