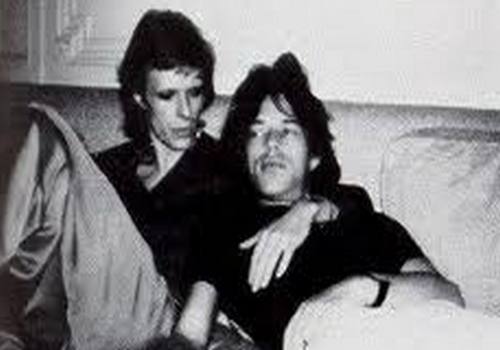 David Bowie‘s ex-wife has claimed that her former husband had romped rock legend Mick Jagger. Angie Bowie finally came out to recall the time she came home and discovered the two in bed together back in 1973; the two were said to have been completely wasted, but she’s sure that the two got it on together.

“They were not only in bed together, they were naked,” she told The Sun. “My assistant was laughing in the kitchen when I got home. She said, ‘You won’t believe this. David and Mick Jagger.’I said, ‘Right then, put the kettle on’. I went upstairs and banged on the door and said, ‘Morning! Ready for breakfast, boys?’I walked into the bedroom and David was there with all these pillows and duvets on top of him and on the other side of the bed was Mick’s leg sticking out. I said: ‘Did you guys have a good night?’. They were so hungover they could hardly speak. I took pity on them.”

Now, it’s coming across as if she was just trying to get herself on a few bucks by selling out her former husband, because let’s not forget, these two split up in 1980 after their ten years of marriage. And when you consider the fact that Bowie is gearing up to release a new album later this year, you question yourself why she comes out with all of this now. We’re not complaining, but it’s just odd! For all we care, we want MORE, MORE, MORE!! LOL

“David was big on threesomes with both men and women,” she said. “The whole nine yards. And I was right in there. The night before our wedding it was a mutual friend of ours. We went out for dinner, back to her place and had plenty of lively sex. We had a very late night and didn’t go to bed until 3am or 4am. Then we woke up late in north London and had to be in Bromley by 10am to get married. We just about got there in time and staggered in.”