Justin Bieber Has A Chat With Will Smith, Thanks Him For Being Understanding 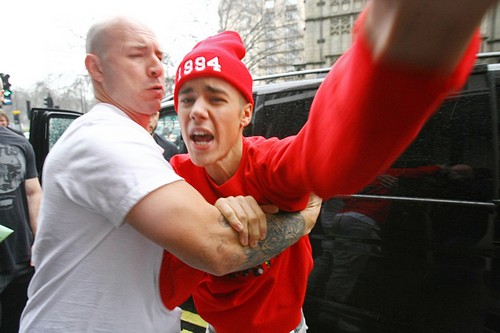 Will Smith has had a little chat with Justin Bieber regarding the incident that occured last week when Jaden Smith supposedly tried to make his way into a nightclub at the age of just fourteen. Note, his father was flying out to London at the time, but once he landed and saw how much press attention it had gotten, Will was clearly worried on what had happend.

Bieber has really acted like a fool in the last couple of days in London, even trying to fight a paparazzo after he was told to f**k off back to America, which we found hilariously funny! Ha. It’s no surprise why Smith had wanted to sit down and talk with Justin on what’s been bothering him for him to act the way he has.

However, after they finished their small talk, it looks like the conversation went better than what people would have thought because Justin ended up praising Will for being so understanding, adding that the actor is aware on how the media can sometimes make you look like the bad guy in every scenario. Totally not cool.

He tweeted: “love to big man Will Smith for the great talk yesterday. We know the truth and we must stand tall. Love u man! thanks!” Thankfully, Justin is already out of London and has traveled to Portugal to continue his Believe tour over in Europe. Let’s hope nothing bad happens this time around.

What do you make of Bieber’s recent behavior?